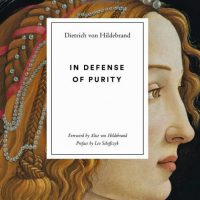 Reading the late theologian Dietrich von Hildebrand’s newly republished book, In Defense of Purity, is to remind oneself that Christian teaching and understanding of sex come from another world – indeed, the world of the supernatural. It is much more profound than merely a question of Catholic morality and keeping to certain rules. It also reminds me what a long way the western world has travelled since this slim book was first published in 1927.

It is not just a question of the redefinition of marriage to include couples of the same sex, the new transgender movement or the acceptance of an adult’s ‘right’ to watch (adult) pornography on the internet, none of which could have been predicted in the post-First World War period. It is that we now live in a society where coarseness in writing about sex is entirely unremarkable. Speaking for myself, I am shocked, not so much by the revelations of Harvey Weinstein’s behaviour, but by the gratuitously explicit, casual way in which it is discussed by serious journalists and broadcasters.

I met up with a friend recently who has lived abroad for some years. Reflecting on her mother’s generation, she remarked on the complete lack of public modesty which would have been taken for granted by ordinary people up until the 1960s and how, returning to the UK for a visit, she has noticed that this former sense of reticence and decency has been further eroded.

So, reading von Hildebrand’s beautiful prose – apparent even in translation from the German – is like breathing a purer atmosphere than that which one generally inhabits. His book is a reflection on purity both in marriage and in consecrated virginity. Always viewing man as created by God he sees, as atheists who support the theory of evolution cannot, how sex, unlike as with food or drink, always “involves the soul deeply in its passion” and thus why surrendering to sexual desire for its own sake “defiles a man in a way that gluttony, for example, can never do.”

When you view purity as “an abiding in God’s presence and a surrender to the glory of His countenance” and when you believe that only within the wedded love of a man and a woman that you can experience “the reverent knowledge that it is by God’s express permission that we have crossed the frontiers of sex”, you will readily accept von Hildebrand’s horror of the “abyss of sin to which the abuse of sex leads.”

Reflecting on sexual seduction, he reminds the reader that “there is in it something irreverent and frivolous, degrading and corroding the soul”. Sex “as the mystery of love” is contrasted with sex as the “vehicle of diabolically evil lust”. These are strong words, but then von Hildebrand recognises that the gladiatorial battle between good and evil in the human soul most often takes place in the sexual arena. In wedded love persons should have the stance of “humility, reverence and gratitude” for the gift of sexual expression given them by God, and instinctively feel “ashamed to unveil this secret to others” precisely because “every disclosure of sex is the revelation of something intimate and personal.”

It isn’t possible to paraphrase such an inspiring book but this selection of quotations does show why and how the air we breathe on the subject of sex is more deeply polluted today than even the natural world that environmentalists regularly remind us about.

I ask John Henry Crosby, President and Founder of the Hildebrand Project, begun ten years ago to translate the philosopher and theologian’s books into English as well as to develop a “community of readers”, why he has chosen to republish this book now? He tells me that the Project’s new publishing arm, the Hildebrand Press, is currently seeking to republish “some of von Hildebrand’s most beloved and influential books.” He sees In Defense of Purity as a candidate in both categories.

Crosby adds there are also two good reason for its republication: “First, because of its rich vision, not just of sexuality but also of the human person, whose quintessential gesture von Hildebrand sees as lying in self-gift”; and secondly, “because von Hildebrand approaches questions of sex, love, marriage with a contagious wonder that can reach our contemporaries.”

He reflects that “while von Hildebrand advances many clear arguments, he does so in an experiential way that awakes in the reader a sense of the depth and mystery of their own being.” Crosby believes that the book “not only prepared the ground for the Theology of the Body, it has also led to many conversions, renewed marriages and religious vocations.” He is hopeful that “it will do so again in 2017”, adding that “if a book could be more relevant nearly 100 years after it first appeared, then certainly it is this one.”

Thinking of the trade of journalism in which I am engaged, I repeat to myself von Hildebrand’s statement in his Transformation in Christ: “The truthful person recognises a solemnity in every assertion. He grasps that in everything he utters he is called to bear witness to the truth.”