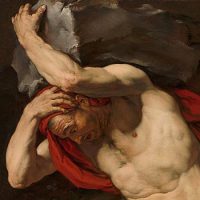 By admin on November 6, 2017 in Uncategorized

Modern man is at a precipice. We all know it. The yearning for something more than empty selves, fleeting friendships, the “joyless quest for joy,” and a desire for the sublime are all indicative of the dimly lit flame St. Augustine says remains in us even after the Fall. Like Aristophanes’s separated man we are busy searching for our other half, but the other half we are searching for is nothing less than God himself.

The signs of the spark of divinity were long recognized in Indo-European culture. As Socrates said to Glaucon in Plato’s Republic, while there are also the virtues of the body, “the virtue of reason seems to belong above all to some more divine.” That Socrates implicitly links the virtue of reason to the Logos is one of the reasons why St. Justin Martyr and the Alexandrian Fathers held Socrates, among other Greek thinkers, in high regard. Socrates, then, recognized—in some manner—the imparted divinity of God to man so “that man might become like god” as St. Athanasius said.

Humans are instinctively questioning beings yearning for answers. Desire for truth was recognized as the beginning of animate man by Plotinus. Aristotle also asserted that “all men by nature desire to know,” which is to say the soul’s search for wisdom is foundation to human nature.

The injunction that “Thou shall not have any other gods before Me” is the ultimate recognition of who we are as humans being. It recognizes that we are images of God created in the love of God and that only in God our desires can be fulfilled. No other idols, whether externally concrete or internally rationalized, can replace and dethrone the Author of the Cosmos who formed mankind from the dust of the earth and breathed into him the breath of life and turned this speck of dust into a reflective image of God. This also recognizes the fundamental aspect of love to the creation drama in which we are not only created autonomous and free—rather than toiling or indentured servants of the gods like the Near Eastern myths—but also created in love for love; it is this love that true dignity flows.

Christianity’s theo-drama is central to our understanding of ourselves. Creatio ex nihilo, creatio ex amore Dei, and imago Dei have no credibility without the second act: the Fall. The Fall is fundamental to Christianity and the resulting stain of iniquity from Adam and Eve’s rejection of God in the Garden is crucial to also understanding who we are and where our yearnings for restoration are to be found. This is apparent to attentive readers when God is calling out for Adam and Eve as they hide in the Garden. Having rejecting Logos, Adam and Eve are haunted by the realization that they have rejected the other half that completes them—imago Dei is now corrupted along with everything else. God gives Adam a chance to take responsibility and remain wedded to him but Adam blames God for having created “this woman” who gave him the fruit to eat from.

The arrogance of man is captured in this crucial passage from Genesis. Rather than remain tied to the beatific union and the wholeness of life found in man’s marriage with God, man decides to double-down on his rebellion and curse God for the ills brought upon him. This is the corruption of the image as Augustine so poignantly describes in De Trinitate. Long before modern man’s attempt to dethrone God and storm Heaven, the first man also attempted to dethrone God. And this attempt to dethrone God spilled over as we see ancient man’s attempt to storm Heaven through the building of the Tower of Babel.

The Fall permanently corrupted the beatific image and our desires are no longer oriented to the Supreme Good but left anxiously pursuing carnal lusts while suppressing all the signs the beauty of this world calling us back to God. As a result we are wanderers searching for restoration but miss all the signs calling us home. Aristophanes captured this through comic equivalence in Symposium, but the problem with Aristophanes is that we seek our restoration only by way of another person.

According to Aristophanes the birth of desire was from Zeus’s punishment which split the human in half to which we spend the rest of our life seeking to restore the lost half of our soul. Christianity understands this split more radically. We did lose a part of ourselves. But what that really meant was that we lost God. The search for being made whole again cannot be consummated through another speck of dust but only by he who breathed into this body of dust the breath of life.

This is the fundamental difference between the Ur-myth in Christianity compared to all other philosophies and religions. In Christianity there is a unity of eros and logos, of desire and the body, tied together in harmony as a mirror image of God’s desiring love and wisdom imparted into man and calls all to participate in his love and wisdom. Socrates, for all his insights, may have proved the immortality of the soul, but he never identified its essence because he “abstracts from the body and from eros; by abstracting from the body and eros, [Socrates] abstracts from the soul.” Socrates may have understood reason as a spark of divinity, but he was unable to bring to light the ultimate nature of the soul: love and praise of God. Socrates’s understanding of eros is without divinity just like Aristophanes’s account.

In Adam’s sin, which was a rejection of God, we see Adam’s embrace of an idol over and against God: himself. Man is the ultimate idol because man fancies himself beyond reproach and is, as Protagoras said, “the measure of all things.” Adam certainly agreed with Protagoras in that regard. As such the most fundamental aspect to human nature was distorted.

To be imago Dei is to have no other idols before God. To put anything before God is to reject the fundamental claim of Genesis and the first act of Christianity’s theo-drama that we are images of the blessed Trinity which called us into being, gave us life, and moved over us to raise us from the sheer depths of darkness to participate with the brilliance of beauty, light, and truth. From seed to fruit-bearing tree is the human odyssey according to the Bible and Christian doctrine. It is not mere coincidence that it is the image of the fruit-bearing tree that St. Paul privileges as fundamental to understanding our growth and maturation in Christ which reaches back to the image of another fruit-bearing tree in the Garden from which man first sinned.

When man becomes “the measure of all things” God is replaced by the most pernicious and destructive idols: the man who rejects his own humanity (which is principally a rejection of God). In man’s rejection of God the imago Dei is compromised. With the corruption of imago Dei the disintegration of creatio ex amore Dei follows. This leaves us with an empty shell of the creation formula: creatio ex nihilo, leaving us with nothing more than hallow man, that speck of dust in the vast darkness of a hallow cosmos “condemned to be free.”

With only creatio ex nihilo as our starting point, man—as Jean Paul Sartre described—is burdened by the weight of his own being-in-the-world. Man, as Sartre claimed, is at first proud that he is the center of the universe. But in “The Look,” which is the realization of other subject-consciences in the world, we are thrown into flux and perpetuity. We lash out and seek to either consign ourselves over to the lust of the other by turning ourselves into concrete objects (masochism) or by fulfilling our own libido dominadi in attempting to sublate the other out of existence (sadism). Sartre’s world of only creatio ex nihilo is a literal hell with no exit. It is an unending torment of the crashing waves of libido dominadi.

Likewise, Camus’s world of only creatio ex nihilo means we must lie to ourselves and “imagine Sisyphus happy” in a perpetual state of metaphysical rebellion against the absurdity of life itself unless we opt for death. But we all implicitly know the Sisyphean struggle is not embodying life at all. It is an acceptance of death without the suicide. We curse the world and find no joy in it.

We cannot love because we were not created in love. We cannot be made whole because we have not lost anything fundamental to our nature. We cannot know truth because there is no Truth and only a world of opinion. But we all intuitively know this is problematic. We do seek something more than ourselves. We seek love, beauty, belonging, community, and union but do not know how to find it because we do not know ourselves. And we also seek Truth. As a result man conjures up new idols in hope to be made whole and cherish as truth while ensnared in the darkness of the Cave as we chase shadows. The drama of man’s rebellion against himself, which is man’s rebellion against being imago Dei, ends with man piling up over himself at Stalingrad.

Our longing will never be satisfied by the fantastical dreams of utopia, the dream of immortality through the abolition of human nature, or in the autonomous will perpetually choosing to be the being-for-itself. The yearning of our restless heart will not find rest until it finds God. In order to find God all other idols must be stripped from the altar we have erected in our heart in lieu of him whom we find eternal rest.