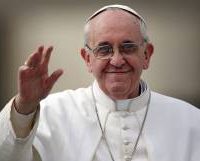 Human life is “sacred and inviolable” and “every civil law is based on the recognition of the first and most fundamental right, the right to life,” Pope Francis told an Italian pro-life organization today.

The pope thanked the Movimento per la Vita, one of Italy’s leading political pro-life groups, for their work, urging them to continue “with courage and love” for life “in all its phases.”

“It is therefore necessary to reiterate the strongest opposition to any direct attack on life, especially innocent and defenseless, and her unborn child in the womb is the innocent par excellence,” the pope told the gathering of politicians and pro-life activists at the Vatican today.

“If you look at life as something that is consumed,” the pope said, “it will also be something that sooner or later you can throw away, with abortion to begin with.”

Human life, however, is “a gift from God” and if it is accepted as such, “then you have before you a valuable and intangible asset, to be protected by all means and not to be discarded.”

In a different tack from previous popes, Pope Francis took the opportunity to link the pro-life message of the Church to his critique of the global economy, a major theme of this pontificate. “This economy kills. It considers the human being in himself as a commodity; a commodity that you can use and then throw away.” He added, quoting his own recent document Evangelii Gaudium, “We started the culture of ‘waste’ that, indeed, is promoted” through abortion in which “even life is discarded.”

One of the “most serious risks” of the modern world, he said, “is the divorce between economics and morality.” In a world offering “a market equipped with every technological innovation, elementary ethical standards of human nature [are] more and more neglected.”

In his brief address, Pope Francis quoted the document Gaudium et Spes of the Second Vatican Council, that says, “Life once conceived, must be protected with the utmost care; abortion and infanticide are abominable crimes.” He encouraged pro-life workers to fight for life “with a style of closeness” to women so that “every woman feels regarded as a person, heard, accepted, accompanied.”

In a speech on Friday to the International Catholic Child Bureau (BICE), the pope also spoke of the need to reaffirm the rights of parents to decide “the moral and religious education of their children” and reject all forms of “educational experimentation with children and young people.”

Every child, he said, has the right to grow up in a family “with a father and a mother” capable of creating “a suitable environment for the child’s development and emotional maturity.” The Pope also warned against the effort to push a “dictatorship of one form of thinking” on children comparing these to the “horrors of the manipulation of education that we experienced in the great genocidal dictatorships of the twentieth century.”

These totalitarian impulses, he said, “have not disappeared; they have retained a current relevance under various guises and proposals.”

The pope’s comments on Friday follow a push from parliamentarians and parents’ rights groups against the recent wave of incursions of “gender ideology” into Italy’s schools. A group of MPs has introduced a bill into Parliament to reinforce the constitutional protection of parent’s right to guide the “ethical” content of their children’s education, even in state-funded schools.

The Reality of Spiritual Warfare
Nun UNDER The Bus