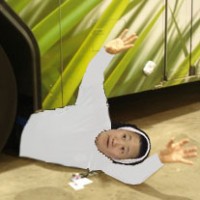 If you want to sample her talks, go HERE. Her talk at the High School was “Masculinity & Femininity: Difference & Gift”.  Presentations with that title are on that website. Listen to a few.  At the High School, Sister included comments about homosexuality, divorce and single parents. Some people lost their minds. Read more here.

I suspect that what happened, to build this up into such a thing, is that parents heard vague reports – I say vague because teens are such great sources of accuracy in reporting – about her remarks from their politically-correctly conditioned children and, stung in conscience, got out the pitchforks and torches.

The nutty built up into grand mal nutty in the form of the increasingly inevitable “town hall” meeting.

Am I entirely off base here?  Did Sister actually say things that were so outrageous, so unacceptable, so lacking in truth and in charity, that the resulting furor was appropriate, proportionate and justified?  Really?  Go listen to some of her talks using that link, above.  Does it seem likely?

Now I read that Sister is going to have a sabbatical.  HERE

It looks as if Alinsky’s Rules were at work here. “The threat is usually more terrifying than the thing itself. … Pick the target, freeze it, personalize it, and polarize it.”

Look.  This is just the starting line for some observations.

It seems to me that this sad episode is one of many which reveal the building in our midst of a mob mentality akin to that which drove the Salem Witch Trials. If you speak in public now with any clarity about the Church’s teachings on sexuality, marriage, etc., or avert to conclusions which rational people reach about the same derived from the Natural Law, you will be met with fury. “I saw Lizzie Procter speaking with the devil!” Well… bad example, since most of the people who will join the snarling pack likely don’t believe in the devil.

There is a new and twisted “normal” coalescing. This new “normal”, violating the dictates of reason, will prompt the more aggressive and ideologically driven to impose iron norms, which, when violated, will spark vicious attacks from the now easily manipulated mob.

Watching episode in Charlotte build, I had the image of one of those mobs protests a G8 meeting. In these mobs there are professional instigators, anarchists and so forth, who are dedicated to getting the crowd of the curious, the young, the dumb, the enthusiastic, etc., whipped up into a frenzy. Then, as the frenzy rises, someone pitches a garbage can through a shop window and the havoc begins.

What is happening in our society that accepts so readily the hounding to ruin of the head of some business because he says that he supports true, natural marriage and does not endorse homosexual unions?

Surely there is something of a mob mentality building, and swiftly. The speed is driven by the new phenomenon of social media arriving in your hand 24/7. It is also driven by the erosion of the ability of many to reason (thanks to decades of poor education) and incessant mass media exaltation of self-satisfaction and base carnality, which also switches off higher functions.

But there is also something of the demonic in this present movement.

Some of you readers will remember back in the 50′s and 60′s the benign anti-littering campaigns. “Don’t be a litter bug!” It was really bad to be a “litter bug”. Remember the TV ads with the weeping Indian looking at garbage along the roadside? YOU made that Indian cry when you threw your bubblegum wrapper on the ground.  It was even patriotic not to litter.  ”Keep America Beautiful!”  It took a while for the campaign to get real traction, a couple decades, but, given the tools of communication at the time it was pretty successful. It was big in schools.  I’m sure that kids turned their homes into re-education camps once teachers in schools were daily pounding on their empty-skulls heads about “pollution”. That campaign was probably also an outgrowth of the early ecology movement and neo-Malthusian efforts, but, hey, cleaner streets and roads were good.

Gramsci got it right: get control of the schools and, over time, you’ll control everything else. Have an agenda? Focus on school curricula and teachers.  Extirpate anyone who doesn’t conform.  Silence any discordant voice.

The campaign that we are seeing now, however, anything but benign. It is brush fire fast and there is in it something of the demonic.