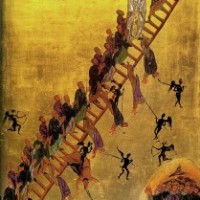 From Archdiocese of Washinton

Sadly, many modern approaches to faith, religion, and spirituality prefer to emphasize exclusively consoling themes rooted in self-esteem, affirmation, etc. To be sure, the authentic faith can and does offer great consolation, but the truest and deepest consolation often comes after one has persevered along the sometimes-difficult path, along the “narrow way” of the cross.

But too many today, in the name of affirmation and pseudo-self-esteem are ready to excuse, and even affirm grave moral disorders, rather than fight them. Grace and mercy are preached, but without reference to the repentance that opens the door to these gifts. Both the possibility of Hell and any consequences of sin, are absent from many modern conceptions of faith and religious practice.

Some years ago, I was approached by a rather angry woman who, having heard my sermon on the seriousness of certain sins (which were in the readings of the day), expressed great indignation that I would preach on such topics. She said, “I come to church to be consoled and have my spirits lifted, not to hear old-fashioned warnings about judgment and sins.” She felt quite a “righteous indignation,” and was most certain that I had transgressed a fundamental norm, namely, that religion exists to console, and that any challenge to one’s moral stance, (except perhaps caring for the poor), is intolerant and way out of line.

Indeed, many today have this kind of attitude: that it is their birthright not to be troubled or vexed in any way by something people might say, especially a preacher who claims to represent God! The “God they worship” would never trouble them. They will have Jesus for their consoler and best friend, but not their Lord, and certainly not their judge. And never mind the literally thousands of verses from Scripture in which Jesus himself speaks sternly and warns of sin, death, judgment, and Hell. They will have none of it, and are certain that “the Jesus they know,” would never raise his voice at them or challenge them even for a moment. Never mind that the real Jesus says to take up our cross and follow him.

With spiritual battle having been removed from many people’s spiritual landscape, the idea that the Lord would summon us to battle, or ask us to choose sides, seems strangely foreign, intolerant, and uncompassionate.

Even more dangerous, these modern conceptions not only distort Jesus, but they downplay the presence and influence of Satan. This is a very, very bad idea. Even if we cease fighting against Satan, he will never ceases his sometimes very subtle attacks on us.

Jesus called consistently for prayerful, sober vigilance against the powers of evil and sin. Like it or not, we are in a battle. Either we will soberly and vigilantly undertake the battle, or we will be conquered and led off like sheep to the slaughter.

Despite what modern spiritual approaches would like to eliminate, Christianity has been a militant religion since its inception. Jesus was exposed to every kind of danger from the beginning. Herod sought his life; Satan tried to tempt him in the desert; many enemies plotted on all sides as he worked his public ministry, misrepresenting him, levying false charges, and conspiring to sentence him to death, and eventually even succeeding though only for a moment.

And as for Jesus, so also for his mystical Body the Church: Saul, Saul why do you persecute me!?  (Acts 9:4) Jesus warns us that the world would hate us (Luke 21:17; John 15:20); that in this world we would have tribulation (Jn 16:33), and that we should watch and pray lest we give way to temptation (Matt 26:41). He summons us to persevere to the end if we would be saved (Mk 13:13). Jesus rather vividly described the kind of struggle with which we live when he said From the time of John the Baptist until now, the Kingdom of Heaven has suffered violence, and men of violence take it by force (Matthew 11:12). Indeed, no Christian until the time that Jesus returns, can consider himself on leave or dismissed from this great spiritual battle, from this great drama that we exist in, this battle between good and evil.

Popular theme or not, we do well to remember that we are in the midst of a great cosmic and spiritual battle. And in that battle, we must be willing to choose sides and fight with the Lord for the Kingdom of God. Either we will gather with him or we will scatter. We are to fight for our own soul, and the souls of those whom we love.

In the holy week that is about to unfold, we are reminded once again of the great cosmic battle that the Lord waged, and that is still being waged in our time. Though already victorious, in his mystical Body the Church, the Lord in his faithful members still suffers violence, rejection, and ridicule. It is also for us to reclaim territory from the evil one, to take back what the devil stole from us. We are to advance the glory of God’s Kingdom through the fruits of great spiritual struggle, sacrifice, prayer, fasting, preaching, and an extensive missionary campaign to which the Lord has summoned and commissioned us.

The battle is on; the struggle is engaged! To spiritual arms one and all! Fight the good fight for the Lord.

Still not convinced we are at war? Let the Lord pull back the veil just a bit and let you look at what’s really going on. The final words of this article will not be mine; they will be the Lord’s. Here is described the cosmic battle that is responsible for most of the suffering and confusion you experience:

A great sign appeared in heaven: a woman clothed with the sun, with the moon under her feet and a crown of twelve stars on her head. She was pregnant and cried out in pain as she was about to give birth. Then another sign appeared in heaven: an enormous red dragon with seven heads and ten horns and seven crowns on its heads. Its tail swept a third of the stars out of the sky and flung them to the earth. The dragon stood in front of the woman who was about to give birth, so that it might devour her child the moment he was born. She gave birth to a son, a male child, who “will rule all the nations with an iron scepter.” And her child was snatched up to God and to his throne. The woman fled into the wilderness to a place prepared for her by God, where she might be taken care of for 1,260 days. Then war broke out in heaven. Michael and his angels fought against the dragon, and the dragon and his angels fought back. But he was not strong enough, and they lost their place in heaven. The great dragon was hurled down—that ancient serpent called the devil, or Satan, who leads the whole world astray. He was hurled to the earth, and his angels with him. Then I heard a loud voice in heaven say:“Now have come the salvation and the power and the kingdom of our God, and the authority of his Messiah. For the accuser of our brothers who accuses them before our God day and night,has been hurled down. They triumphed over him by the blood of the Lamb and by the word of their testimony; they did not love their lives so much as to shrink from death. Therefore rejoice, you heavens and you who dwell in them! But woe to the earth and the sea, because the devil has gone down to you! He is filled with fury, because he knows that his time is short.” When the dragon saw that he had been hurled to the earth, he pursued the woman who had given birth to the male child. The woman was given the two wings of a great eagle, so that she might fly to the place prepared for her in the wilderness, where she would be taken care of for a time, times and half a time, out of the serpent’s reach. Then from his mouth the serpent spewed water like a river, to overtake the woman and sweep her away with the torrent. But the earth helped the woman by opening its mouth and swallowing the river that the dragon had spewed out of his mouth. Then the dragon was enraged at the woman and went off to wage war against the rest of her offspring—those who keep God’s commands and hold fast their testimony about Jesus. (Rev 12)