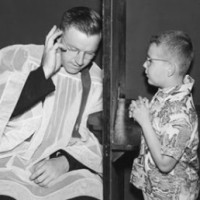 There are several questions we need to sort through before we get to the reason we all need Confession.

We have to lay some groundwork before giving adequate answers.

Most people easily see that sin can damage the relationship between us and God. This is why all Christians seek forgiveness of sins in some way. But, this isn’t the only damage done. St. Paul tells us, in several of his letters, we are all united to God in one body of Christ – the Church. One example of this teaching:

“We, though many, are one body in Christ and individually parts of one another.” – Romans 12:5

So, when we sin we can damage others. As Paul says in his long teaching on the Body of Christ in 1 Corinthians:

Thus, we not only damage the relationship with God, but also with other members of the Church. The Catechism teaches:

The third damage caused is to ourselves. We are created for goodness and holiness. When we sin, in a sense, we become less of who we were created to be. This damage needs to be repaired also. This healing only happens when sin is forgiven.

After the Resurrection, Jesus appeared to his disciples who were gathered in the upper room, scared out of their minds and confused. Christ comes and breathes the Holy Spirit on them and then commissions them to forgive sins. This is only the second time God breathes on humans. The first is when He breathes life into Adam. Breath is a symbol of the Holy Spirit.

“On the evening of that first day of the week, when the doors were locked, where the disciples were, for fear of the Jews, Jesus came and stood in their midst and said to them, “Peace be with you.” When he had said this, he showed them his hands and his side. The disciples rejoiced when they saw the Lord. (Jesus) said to them again, “Peace be with you. As the Father has sent me, so I send you.” And when he had said this, he breathed on them and said to them, “Receive the holy Spirit. Whose sins you forgive are forgiven them, and whose sins you retain are retained.”” – John 20 19-23

The apostles are sent as the Father has sent Jesus – with the authority to forgive sins. But, how could they know which sins to forgive and which to retain, if the sins were not confessed? This is why the book of James says this:

“confess your sins to one another and pray for one another, that you may be healed.” – James 5:16

In this context of this verse, a person is told to “summon the presbyters of the church” (James 5:14). Presbyter is the Greek word for priest (or elder).

Therefore, based on the Biblical evidence, we see forgiveness of sins is explicitly tied to confession to a priest, who has the authority to forgive sins, which is given by Christ. Christ thus heals the relationship through the priest and we are reconciled to both God and His Church – healing the two-fold damage done in our relationships.

Can You Go Straight to God?

Yes and no. We are told, as we see clearly in Scripture above, that we are to confess our sins to one another. Thus, the ordinary way we have our grave sins forgiven is through the Sacrament of Confession. Thus, this is the way that Christ has established as the ordinary way to forgive grave (i.e. mortal) sins. But, there are extreme circumstances where God may forgive grave sins outside of Confession if the person has perfect contrition (sorrow) for their sins, but these are extraordinary.

Also, we are only required to go to Confession once a year during the Easter season, and only if we have committed a mortal sin. Thus, all venial sins can be forgiven by going straight to God, though they can also be forgiven in Confession, and this is recommended whenever possible.

Can only Catholics Have Their Sins Forgiven?

The simple answer is no. While confession is the ordinary way to have your sins forgiven, it is not the only way. The Catechism says:

“When it arises from a love by which God is loved above all else, contrition is called “perfect” (contrition of charity). Such contrition remits venial sins; it also obtains forgiveness of mortal sins if it includes the firm resolution to have recourse to sacramental confession as soon as possible” (CCC 1452).

If someone is not Catholic (thus they do not have recourse to the Sacrament), then they can be forgiven, with perfect contrition and confession of their sins to God. If a non-Catholic is in danger of death, they can receive the Sacrament – if they are a baptized Christian.

“If there is a danger of death or if, in the judgment of the diocesan Bishop or of the Episcopal Conference, there is some other grave and pressing need, catholic ministers may lawfully administer these same sacraments to other Christians not in full communion with the catholic Church, who cannot approach a minister of their own community and who spontaneously ask for them, provided that they demonstrate the catholic faith in respect of these sacraments and are properly disposed.” (Code of Canon Law, canon 844.4)

So, Why Go to Confession If you Can be Forgiven Without It?

Many reasons, in fact, I came up with at least 21 of them:

21 Reasons To Go To Confession

Words For Reflection This Lenten Season
The Reality of Spiritual Warfare