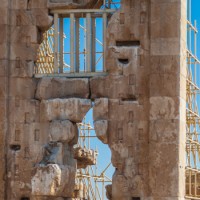 After Constantine the Great, there were emperors who were heretics and emperors who adhered to Christian orthodoxy.

Then there was Julian the Apostate.

From the time of Constantine to the French Revolution, he is the only Christian monarch ever to openly reject the faith, according to Catholic historian Warren Carroll. For reasons both personal and intellectual, Julian launched the last great attempt to revive ancient Roman paganism. Animal sacrifices resumed in the reopened pagan temples while the Church was stripped of the imperial funds and lands that had been granted under past emperors.

Julian so despised the Christian faith that he even attempted to reverse his baptism by bathing in a bull’s blood. One ecclesiastical historian describes him as a man “who had made his soul a home of destroying demons.”

For Julian, persecution, oppression, and financial extortion of Christians weren’t enough. In the second year of his reign, in 362, he conceived an extraordinary plan to undermine the credibility of Jesus Christ by annulling one of his prophecies. In Matthew 24, while the disciples were pointing out the temple buildings, Christ told them, “You see all these things, do you not? Amen, I say to you, there will not be left here a stone upon another stone that will not be thrown down.” As students of history will remember, this was fulfilled with the destruction of the temple in 70 AD, during the First Jewish-Roman War.

For Julian, the solution was simple: all he had to do was rebuild the temple.

A special imperial official was appointed to oversee the task. And Julian was able to take advantage of the pious enthusiasm of Jews from across the empire, some of whom contributed money to the effort, others volunteering as laborers, according to accounts from early Church writers.

Special tools of silver were forged for the occasion. Ground was broken. The small army of workers poured right into the work, toiling right up until nightfall.

Signs of trouble immediately appeared: after the first day, the workers awoke to find the soil they had removed had shifted back into place. Undaunted, they resumed work when “of a sudden a violent gale blew, and storms, tempests and whirlwinds scattered everything far and wide,” according to the account of the ecclesiastical historian Theodoret.

Then calamity struck: an earthquake rocked the site, followed by fireballs that burst out of the unfinished foundations for the temple, burning some men, and sending the rest in flight. Some rushed into the church that had been built by Constantine’s mother, St. Helena, only to have its doors shut in front of them by “an unseen and invisible power,” according to one account.

Some accounts of the disaster read like a retelling of the plagues visited upon Egypt: the fountains by the old temple stopped working, a famine broke out, and two imperial officials who had desecrated some sacred vessels met with grisly deaths. One was eaten alive with worms. The other “burst asunder in the midst.”

All this culminated with the appearance of the cross—either in the sky or sprinkled like stars on the garments of the workers, according to early Church accounts.

Needless to say, the temple was never rebuilt. This much is certain.

But how credible are the accounts of the miraculous events that halted the construction? The above synopsis is taken from five Church writers, all of whom lived during the events they described or immediately afterwards when eyewitness testimony would still have been available. Though they vary in some details, all five agree on three essentials of the narrative—the earthquake, the fire from somewhere below the temple, and some miraculous appearance of a cross symbol.

Three are ecclesiastical historians—Theodoret, Sozomen, and Socrates Scholasticus. Maybe you haven’t heard of those historians and aren’t too inclined to trust them, but how about saints like John Chrysostom and Gregory of Nazianzus, who also wrote about the foiled rebuilding of the temple? (Read their accounts here and here.)

All five writers present the calamitous rebuilding as historical fact. Some go at length to demonstrate that they personally have done their due diligence in assessing the veracity of the story. Gregory of Nazianzus notes that there might be some factual disparities in accounts, but he then adds: “But what all people nowadays report and believe is that when they were forcing their way and struggling about the entrance a flame issued forth from the sacred place and stopped them.”

Likewise, Sozomen writes the following regarding the fire: “This fact is fearlessly stated, and believed by all; the only discrepancy in the narrative is that some maintain that flame burst from the interior of the temple, as the workmen were striving to force an entrance, while others say that the fire proceeded directly from the earth. In whichever way the phenomenon might have occurred, it is equally wonderful.” Such are not the words one would expect from writers who are embellishers of pious legends.

What makes the story so compelling is that it is also reported in a matter-of-fact fashion by the Roman pagan historian Ammianus Marcellinus, who confirms the core narrative about a strange fire breaking out in his work, Res Gestae (“things done”):

[T]errifying balls of flame kept bursting forth near the foundations of the temple, and made the place inaccessible to the workmen, some of whom were burned to death; and since in this way the element persistently repelled them, the enterprise halted.

Marcellinus, of course, does not call this a miracle, and the significance of the event in the history of Judaism and Christianity seems lost on him. But his account—presented without any qualification about the credibility of the story—stands as an extraordinary corroboration of the five accounts by Christian authors.

And yet, the event doesn’t seem to have gotten much attention from contemporary historians, who don’t seem to share Marcellinus’ commitment to even-handed reporting. As Warren Carroll has written in The Building of Christendom,

It is one of the most remarkable events in Christian history, for which no natural explanation is possible, and which all too many historians have seen fit to ignore despite the high repute of Ammianus Marcellinus as a historian, the confirming of his account by many Christians historians, and his obvious lack of bias and the lack of time before he wrote which would have been required for an unhistorical legend about the event to have developed.

As Christians we believe miracles still happen in the here and now. But usually, what’s involved is some sort of personal healing of someone with an ailment or injury—those, at least, seem to be the most common sort of miracle used nowadays as a criterion for canonizing saints.

However, public miracles that leave lots of eyewitnesses and involve some sort of dramatic occurrence seems like a thing of the Old Testament past—the parting of the Red Sea, the tumbling walls of Jericho, the fire and brimstone that consumed Sodom and Gomorrah come to mind. The foiled rebuilding of the temple under Emperor Julian the Apostate stands as an extraordinary witness to God’s enduring intervention in the created order.

Rev. Billy Graham: ‘America is Just as Wicked as Sodom and Gomorrah Ever Were’
Analysis of the Synod on the Family