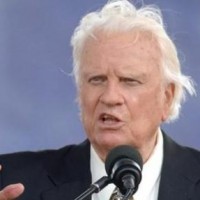 Reverend Billy Graham, arguably the most well-known and respected evangelical preacher of the last 50 years, said in a recently published commentary that America was “founded by men who believed in prayer” and that prayer can turn “the tide of history,” adding that while “America is just as wicked as Sodom and Gomorrah” and deserves “the judgment of God,” this judgment can be lessened through prayer.

“Even though America is just as wicked as Sodom and Gomorrah ever were, and as deserving of the judgment of God, God would spare us if we were earnestly praying, with hearts that had been cleansed and washed by the blood of Christ,” said Rev. Graham in his commentary for Decision magazine, published by the Billy Graham Evangelistic Association.

“The problems of the world will never be settled unless our national leaders go to God in prayer,” he said. “If only they would discover the power and wisdom that there is in reliance upon God, we could soon see the solution to the grave problems that face the world!”

Graham is 95 and reportedly often bedridden at his home in Montreat, N.C. His commentary in the October issue of Decision, under the headline “Turning the Tide of History,” was reprinted from a sermon he delivered Jan. 7, 1962 on the Hour of Decision radio program.

Reverend Graham’s comments start off in saying, “Our nation was founded by men who believed in prayer,” and notes that Benjamin Franklin, in addressing the 1787 Constitutional Convention, said that “God governs in the affairs of men.”

“Today the world is being carried on a rushing torrent of history that is sweeping out of control,” said Rev. Graham.  “There is but one power available to redeem the course of events, and that is the power of prayer by God-fearing, Christ-believing people.”

He continued, “One of the reasons the United Nations has become so ineffective in handling world situations is that there is no prayer, no recognition of God. Unless the leaders of nations turn to God in prayer, their best plans will fail, just as did the plans of those who built the tower of Babel.”

Rev. Graham then noted numerous instances from the Bible where people “turned the tide of history by prayer.”  For example, he notes, Elisha prayed and a young man was raised from the dead; Jesus prayed and Lazarus rose from the dead; the thief on the cross next to Jesus prayed and Jesus told him he would go to paradise that day; John Wesley prayed and religious fervor grew in England, and the same happened with Johnathan Edwards in Northampton.

“I tell you, history could be altered and changed again if people went to their knees in believing prayer,” said Rev. Graham.

Rev. Billy Graham, whose wife Ruth died in 2007, has five children and 19 grandchildren. He has been listed as one of the most admired men by Gallup almost every year since 1955. Over the decades, his evangelical Christian message was heard, in person, on radio, and through television, by an estimated 2.2 billion people. Rev. Graham is often referred to as “America’s pastor.”