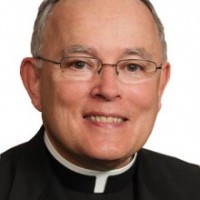 The Archbishop’s following remarks, published by the Pontifical Council for the Laity, are a condensed and adapted version of comments he shared on May 27 with his brother Philadelphia priests at their annual convocation (see a related story on the convocation).

Joseph Greaton, an English convert and Jesuit, was Philadelphia’s first resident priest.  In 1732, eleven persons attended his first Mass at old St. Joseph’s.  In September 2015, 300 years later, another Jesuit will celebrate Mass for us in Philadelphia at the World Meeting of Families. The congregation will be more than one million people.

Pope Francis stirs the hearts of a great many Catholics, and his visit will create an opportunity to renew the local Church.  Over the past few years the Archdiocese of Philadelphia has struggled with serious financial and legal problems.  Thanks to a great deal of work by our people and priests, the material conditions of the local Church have improved.  But material health means nothing for a Church, unless it sets the stage for something more important:  renewing the heart and spirit.

That is the issue before us in the months and years ahead:  How can we help that deeper renewal to happen?

I’ll answer that in a roundabout way.

Over the past year, the national Barna Research Group did a demographic and attitude study of Catholics across the five Pennsylvania counties of the Archdiocese of Philadelphia.  They interviewed — in depth — more than 400 parishioners.  Barna also talked with 30 key archdiocesan stakeholders; in other words, major contributors, senior pastors and key pastoral staff.

The threshold for inclusion in the survey was simple.  To qualify, a person needed to attend Mass at least once a month and confession once or twice a year.  For self-described Catholics who were contacted but did not meet that threshold, Barna tried to get as much information as possible about why they left or were alienated from the Church.

Barna is still working on the data.  But here is what Catholics in the Greater Philadelphia region think of their pastors.  Nearly 80 percent feel their pastor is hard-working; 74 percent see their pastor as a genuine spiritual leader; 73 percent see him as caring and generous; 69 percent see the pastor as widely available to his people; and 63 percent rate him as “excellent” in his priestly service.  Along with Catholic education and the social services of the Church, our priests are admired and genuinely loved by our laypeople.

In the wake of a very painful decade for Philadelphia’s Catholic community — a decade of clergy abuse cases, negative media and fiscal troubles — these positive views say a great many good things about the vast majority of priests who minister in our parishes.

On the other hand, a much lower number of parishioners see their parish as a welcoming place; or as spiritually healthy; or as offering strong homilies; or as having good financial management and transparency.  Many parishioners feel their loyalty is not reciprocated.  There is no contradiction in these data.  Philadelphia laypeople want to love their priests.  But they are much more candid when they talk about parish policies and structures.  And they are far more critical of the archdiocese than their local parish — which should surprise no one.

Practicing Philadelphia Catholics tend to be better educated than the general public.  More than two-thirds have at least some college education.  Nearly three-quarters attended Catholic schools at some point, and a very high percentage rate their experience of Catholic education as good.  Most attend Mass weekly.  Most give generously to charity.  And most continue to express an overall trust in the Church.

Having said that, we need to consider two more facts.  Philadelphia Catholics are heavily “white” in a national culture that’s rapidly growing more diverse.  They are also heavily concentrated in the Baby-Boomer and Elderly age cohorts — in other words, they’re aging out.  Very few of our active Catholic population are Millennials.

And one other reality is worth noting.  Even among Catholics who practice their faith and generally trust in the Church, nearly 40 percent feel alienated from one or more core Catholic teachings.  This implies a significant number of former or lapsed Catholics who simply don’t show up on the survey.

If we combine these data with national U.S. studies done by University of Notre Dame social researcher Christian Smith on religion among teen-agers and young adults, and with the Pew Research Center’s data on the sharp growth of the religiously unaffiliated in the United States, the lesson is clear.

The Church of most U.S. priests’ childhood — the parish life we all once fell in love with — is ending.  And it is not coming back, at least not in our lifetimes.  American culture has changed drastically in the years since many of my brother clergy were ordained.  But the thinking of those of us who are pastors, both bishops and priests, often has not.

It is an odd moment for U.S. Catholics.  Compared to the past, we still have ample material resources; more people and more infrastructure than St. John Neumann, the fourth bishop of Philadelphia who created the American parish school system, could ever have imagined.  But the moral riptide in today’s daily life – the secularized culture that shapes all of us – is also something that Neumann could never foresee.

So, what is to be done?  We can start by understanding that the Church 20 years from now — even here in Philadelphia, which values tradition so highly — will be smaller, less wealthy, less influential and probably less free to do her work than at any time in the last century.  For believers, our job, starting now, is to make sure she is also more zealous, more faithful and better led.

This is a moment that requires candor.  Philadelphia has a legacy of Catholic faith and social service unrivaled anywhere in the United States.  That legacy is worth all of our energy and all our best efforts to sustain.  But we need to see the world as it really is.  A lot of Americans love Pope Francis because he embodies a spirit of humility and joy.  And they should, because he does.

But at least as many people — and maybe quite a few more — love a “Pope Francis” of their own creation; a Pope who will dispense with all of the most inconvenient Catholic moral demands.  When that does not happen — and it finally cannot happen — a lot of people may not be happy, and “tolerance” for the Church may get very scarce, very quickly.

Professor Gerard Bradley of the University of Notre Dame School of Law is a constitutional scholar and a longtime friend of mine.  Recently he shared with me his belief that “the most perilous [developing challenge that U.S. Catholics face] has to do with the establishment of ‘sexual health,’ ‘gender identity’ and ‘sexual self-determination’ as paramount goods even for children and minors — such that their parents and the Church become serious threats to these minors’ alleged well-being.  In other words, Catholic parenting is in jeopardy of being branded, in relatively short order, as a kind of child abuse, a calumny against which our diminishing religious liberty protections will be thin shields.”

That may sound excessive, but Prof. Bradley is not alone in his views.  I have heard the same or similar concerns from other Catholic attorneys and law scholars across the United States.  So have other bishops.  The Church in my country is heading into a very ambiguous moment.  And most of our people, and many of my brother priests and deacons, really do not understand what the future may look like.

If the U.S. Supreme Court establishes a constitutional right to same-sex “marriage” this summer — and it likely will — the legislative, judicial and administrative implications for American public life are very broad.  Civil marriage is not just about allowing same-sex couples to “marry.”  It also implies the right to force others to give the marital relationship special treatment in many different contexts.  And since terms like “marriage,” “family” and “spouse” appear everywhere in U.S. law, the legal conflicts arising from marriage redefinition will become much more frequent.

The Church will be very vulnerable to government interference in those of her ministries which fall outside of her core worship functions, such as her social service agencies and educational institutions.

These are sobering facts.  But if we priests are who we claim to be – men ordained to serve our people in the person of Jesus Christ – they really should not distress us.  This is what priests were called by God to do: to lead, to serve and to strengthen God’s people.  If the task were easy, anybody could do it.  But God called us.  And that brings me to a final point for thought.

Russell Shaw, one of the finest Catholic laymen I have known in my lifetime, recently turned 80.  For decades, he was an eloquent spokesman for the U.S. bishops and later for the Knights of Columbus, and he remains a wonderful scholar and writer.

Over the years Shaw has had two great passions: a love for the Church and her priests; and an intense dislike for clericalism.  By “clericalism” he means not just the wrongful pride and misuse of authority that can creep into priestly life – though there can be plenty of that.

He also means the enabling behavior that too many laypersons develop to avoid the obligations of their own baptism.  If “Father,” in the person of the priest, always knows best, or thinks he knows best, then Father is always responsible for everything, and the spirit of a parish swings between adolescent piety and resentment.  And that is never healthy for a priest or his people.

A good priest loves his parishioners.  He listens to their counsel, respects their abilities and adjusts his life to the needs of those he serves.  He treats them as equals.  He keeps them fully and honestly informed.  And he also learns to live with their criticism, and to genuinely share his leadership without giving up his authority as a pastor.  It can be done.  Many priests already do it.

But in loving his people, a priest also needs to lead them to “own” their lay vocation as full partners with equal dignity in the work of the Church.  And that involves much more than being a lector or usher or extraordinary minister of Holy Communion — as important as those tasks are.  It also means that committed laymen should not automatically need to become permanent deacons; although again, the permanent diaconate is a great gift to the Church.

For 50 years the Church has talked about the dignity and urgency of the lay Catholic vocation.  And yet, as we stand on the brink of a cultural and moral eclipse in the United States, obviously very few people in my country really got the message.

In speaking to Rome’s pastoral convention in 2009, Benedict XVI had some words that I have tried to brand into my memory.  He said that “[The Church needs] a change of mindset, particularly concerning laypeople.  They must no longer be viewed as ‘collaborators’ of the clergy, but truly recognized as ‘co-responsible’ for the Church’s being and action — thereby fostering the consolidation of a mature and committed laity.”

The task facing pastors is simple and difficult at the same time: simple, because all it takes is encouragement, patience and attention in cultivating lay leaders; and difficult, for all the same reasons.

The Church will endure and thrive in the years ahead because God wills it so.  But a renewal of spirit in the Church of Philadelphia, and elsewhere, depends not on money, or legacy, or buildings, or even a wonderful visit from the Pope — but on the ability of our priests and people to change the way Catholics think about the mandate and the privilege of baptism.  If we achieve that as a Church, the rest will follow.

The preceding originally appeared on the blog of the Pontifical Council for the Laity.