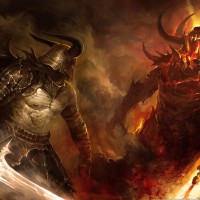 By admin on September 21, 2014 in Uncategorized

From the Diocese of Washington

A grave deficiency of modern times is the loss of the sense that our lives are caught up in a tremendous, epic battle. And yet here we are living in the midst of a great drama—in the greatest story ever told.

Behind the scenes is a deadly enemy, one of whom many rarely speak: Satan. Yet he is active and involved, manipulating both the world and the flesh (our sinful nature). We are on the front lines of a fierce spiritual war, a war that is to blame for most of the casualties you see around you. Yes, fellow Christians, there is a dragon, the roaring lion—Satan—who seeks to devour our souls.

Ah! But there is also a Son, a Savior, who is born to us and whom we call Wonderful Counselor, Mighty God, Everlasting Father, and Prince of Peace (cf Is 9:6). And He shall reign forever. His hand is outstretched, first on the cross, but now outstretched to you to save you and to draw you up out of the raging waters, to deliver you from the kingdom of darkness into the Kingdom of light!

Will you take hold of His hand, or not? This is the decision—your decision—in the great drama of your life and of every life; it is your chapter in the greatest story ever told.

Yes, the battle rages all around us and we are swept up in it! It’s happening in our world, our culture, our families, and in our hearts. The sequence hymn from Easter says dramatically of it,  Mors et vita duello; Conflixere Mirando (death and life at battle in a stupendous conflict)!

The Book of Joel vividly describes the great drama, not merely an eschatological battle, but a battle that is already around us in the decision we must make, in the war we must wage, with God’s grace, against the evil that is in and around us. It is a vivid and dramatic war and we must choose sides. And our decision will one day be revealed in the great judgment that is coming on this world.

Prepare war, stir up the mighty men! Let all the men of war draw near, let them come up. Beat your plowshares into swords, and your pruning hooks into spears; let the weak say, “I am a warrior.” Hasten and come, all you nations round about, gather yourselves there. Bring down thy warriors, O LORD. Let the nations bestir themselves, and come up to the valley of Jehoshaphat; for there I will sit to judge all the nations round about. Put in the sickle, for the harvest is ripe. Go in, tread, for the wine press is full. The vats overflow, for their wickedness is great.  Multitudes! Multitudes, in the valley of decision! For the day of the LORD is near in the valley of decision (Joel 3:9-14).

Text after text in the Bible describes the awesome drama and the great decision we must make, a decision on which hinges our very destiny. Here are just a few:

And so here we are in the Valley of Decision, in Hebrew, the Valley of Armageddon. Here is the drama of our life! Multitudes in the Valley of Decision! All of us have a decision to make, an army to join, a direction to choose! Tertium non datur (No third way is given). There are only two armies on the field of battle; there are no demilitarized zones, no sidelines. Choose an army! What will it be, light or darkness, grace or sin, Jesus or Beelzebub?

Yes, here is the immense drama in the greatest story ever told; it is our drama and our story.

And yet this drama is hardly ever discussed today. In the very times in which the drama and the contrast between the two ways has never been clearer, never been starker, there is near silence. If anything, our times are marked by boredom and a kind of dull lack of awareness of the battle that is raging around us.  We have “spiritual ADHD,” endlessly fidgeting but never focusing on what matters. There is also a kind of “spiritual myopia,” in which the two armies are lost in the blur of perceived (but not real) “pluralism.”

Put plainly, if you don’t think that this drama is real and that the choice of one side or the other is required, if you think that the biblical texts I have cited are histrionic and hysterical, you have been deceived. You have been lulled to sleep by the spirit of this age.  You’ve been deceived by Satan, as was Eve long ago when he said to her, “You surely will not die.”

All of us must wake up to the battle that rages about us, to the great drama in our life, a drama that is unfolding before our very eyes. If you insist on sleeping through the drama or ignoring the summons to wake up, beware! For Scripture says of such dreamers that there will come upon them a strong delusion, to make them believe what is false, so that all may be condemned who did not believe the truth but had pleasure in unrighteousness (2 Thess 2:11-13).

Awaken to the drama! Choose the Lord! Be a soldier in the army of the Lord! Only Jesus can save us from this “present evil age.” His grace and mercy are there for us in abundance, but His respect for our freedom means that our choices matter, they build in one direction or the other. This is the drama of our life and is also our dignity. Scripture pronounces a great blessing on those who choose the Lord:

Grace to you and peace from God the Father and our Lord Jesus Christ, who gave himself for our sins to deliver us from this present evil age, according to the will of our God and Father; to whom be the glory for ever and ever. Amen  (Gal 1:1-2).

Cost of Discipleship
The Danger of Being Religious and Idle