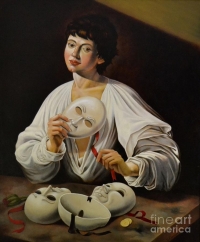 By admin on September 30, 2014 in Uncategorized

This Sunday’s Gospel (the 26th Sunday in Ordinary Time, Year A) is directed at those of us who consider ourselves religious.

Jesus tells the story of the man who had two sons — one said he would work in the vineyard but didn’t; the other said he wouldn’t but did. Who did the father’s will?

It’s the second, of course, but the story speaks to a common phenomenon.

We tell God we will be there for him, but he somehow never sees us sweating in the vineyard.

That’s dangerous. In Blessed John Henry Newman’s Plain and Parochial Sermons the then-Anglican pastor drives home this lesson in sermon after sermon: He warns about “Profession Without Practice” and says, in “Knowledge of God’s Will Without Obedience”:

“Go before God’s judgment-seat, and there plead that you know the Truth and have not done it. … How will it there be taken? ‘Out of thine own mouth will I judge thee,’ says our Judge Himself, and who shall reverse His judgment?”

Aristotle pointed out that we are what we choose to do. It is an obvious truth, but we often forget it: We too easily fall into the trap of considering our actions separate from our identity.

God knows it even if we don’t: There are not two of each of us. There is not a me that commits a sin, rejecting God’s love, and another me that is really a great guy who means well and is just “experimenting” with evil, not giving it his heart.

There is only one me. And that me has freedom. Terrible freedom, says the Catechism:

“Mortal sin is a radical possibility of human freedom, as is love itself. It results in the loss of charity and the privation of sanctifying grace, that is, of the state of grace. If it is not redeemed by repentance and God’s forgiveness, it causes exclusion from Christ’s kingdom and the eternal death of hell, for our freedom has the power to make choices forever, with no turning back” (No. 1861).

The father in Jesus’ story doesn’t give the first son the benefit of the doubt because he is so positive and loving and full of good intentions, and he doesn’t judge the second son sourly because he was so negative and quick to rebel. He isn’t concerned about the self-conception or professed love of the sons at all.

He only cares about what they actually do.

The son who did the right thing is rewarded. The one who didn’t isn’t. End of story.

Ultimately, that will be how God judges us — not on what we meant to do, but on what we did.

Christ told his hearers in his day that “tax collectors and prostitutes” were entering the Kingdom of God before them. These are people who are not sophisticated enough to know all the right things to say. They know they have to actually change their lives.

It’s an appropriate Gospel to kick off a week of saints known mainly for their deeds: The archangels and guardian angels are simply those who do what God says. St. Thérèse’s “Little Way” is about simply doing the small things you are called to do. And St. Francis is known for preaching first with his actions, not his words.