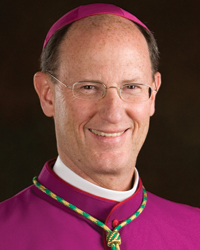 Bishop James Conley of Lincoln hopes his new pastoral letter on the sacrificial “language of love” and the disruptive immorality of contraception will be received “with open hearts and open minds.”

“My hope is that people, Catholic couples especially, and also Catholic physicians and pharmacists, will be willing to look at this issue again,” he told CNA March 20.

“The Language of Love” is Bishop Conley’s pastoral letter on the sacrificial nature of love and on contraception, officially promulgated March 25 — the feast of the Annunciation, when the Church celebrates Mary’s assent to becoming the Mother of God. The letter can be read in full, and listened to, here.

Bishop Conley said Paul VI’s 1968 encyclical “Humanae Vitae,” which rejected contraception as contrary to Christian ethics, had a “prophetic message” that was “good news for all Catholics, since we know that the contraceptive mentality has been so pervasive and so devastating.”

He said he hopes that couples using contraception, and physicians prescribing it, will “think again” about their actions, and turn to “God’s tender mercy by making a good heartfelt confession.”

“We live in a world short on love,” he lamented.

The pastoral letter warns that “when it rejects the gift of new life, through the use of contraception,” American culture is rejecting love.

“Husbands and wives are made to freely offer themselves as gifts to one another in friendship, and to share in the life-giving love of God.”

He said God created marriage to be unifying and procreative, joining husband and wife “inseparably in the mission of love, and to bring forth from that love something new.”

“Contraception robs the freedom for those possibilities,” he continued, warning that the use of contraception “gravely and seriously disrupts the sacrificial, holy and loving meaning of marriage itself.”

He said marriage is a call to “loving as God loves… freely, creatively and generously.”

The letter will be delivered to every registered family in the diocese, and will be made available as a podcast and as a broadcast on Nebraska Catholic radio.

Bishop Conley voiced gratitude for the example of the “hundreds of families” who have “opened themselves freely and generously to children.”

While this requires sacrifice, he said, “sacrifice is the harbinger of true joy.”

“The Language of Love” was inspired by  a 1991 pastoral letter, “In Obedience to Christ,” issued by Bishop Glennon Flavin, who shepherded the Lincoln diocese from 1967 to 1992.

Bishop Flavin’s letter had discussed contraception’s incompatibility with Catholic married life and medical ethics, and is regarded as a landmark in the history of the Diocese of Lincoln.

Bishop Conley said that his predecessor’s letter had “a profound effect” on him as a young priest in the Diocese of Wichita.

When he became Bishop of Lincoln in November 2012, he began to think how he could re-present Bishop Flavin’s “wonderful, beautiful teaching,” which led to his preparation of “The Language of Love” as an update to his predecessor’s teaching.

Bishop Conley told CNA that Catholics who reject or ignore the immorality of contraception should look to the Church and to the teachings of Christ as “a message of love and mercy,” a message proclaimed by Pope Francis.

The bishop’s letter specially addressed Catholic physicians, pharmacists, and other health care professionals. He praised their efforts to help their patients, but at the same time he said no Catholic health care providers should engage in medicine “by undermining the gift of fertility.”

Health care, he noted, is “the art of healing,” while and contraception and sterilization “denigrate and degrade the body’s very purpose.”

John Brehany, executive director of the Catholic Medical Association, told CNA March 20 that he welcomed the pastoral letter as “a clear, compelling call to fidelity on an issue that is central to human happiness and health,” saying the letter has an “inspiring and constructive explanation” of Catholic teaching on contraception and sterilization.

“Even the choir needs to hear good sermons from time to time.”

The letter can bring clarity to health care professionals who are confused or ignorant of their moral obligations related to contraception and sterilization; Brehany said he knows many Catholic physicians who did not know about the immorality of these practices for many years.

“People respond to the truth, especially when it is spoken with clarity and love,” Brehany continued, encouraging lay Catholics to read the letter and to “share it with confidence.”

Penance and Mortification – What Is the Difference?
Prof. Michael McConnell on the Hobby Lobby Arguments