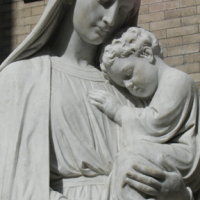 October 27, 2014 by Msgr. Charles Pope from the Archdiocese of Washington website

In today’s Office of Readings there is a text from the Book of Wisdom that prophetically interprets the times in which we are living. In the 30 years I have been reading this text in the Breviary, I found that the pieces of this prophecy are continually falling into place. In my earlier years I would have found the threats or persecution to be too overstated for our times. That is changing now and slowly we are seeing each element become more clear.

In the text that follows I will be quoting from the Book of Wisdom Chapters 1 and 2. My Commentary is in plain red text. The un-interrupted text can be read here: A Diagnosis of Wisdom

But ungodly men by their words and deeds summoned death; considering it a friend, they pined away, and they made a covenant with death, they deserve to be in its possession. Thinking not aright…

Thus, some express concern about overpopulation pollution, and the straining of resources. The solution? Death. In this case the existence far fewer human beings through contraception. Is a child in the womb inconvenient, or unwanted? The solution? Kill him. Is a child in the womb possessed of possible birth defects or likely to be born into poverty? Then kill her. Is someone in the advanced stages of a disease, or old age, or even extensive depression? Are they suffering? The solution? Kill them; or let them kill themselves with the doctor assisting. Has heinous crime been committed? Find the offender and kill him. Even entertainment is saturated with violent and death-oriented solutions. And so in the typical adventure movie our hero resolves the problem with 90 minutes of car crashes, blowing up buildings, killing lots of people, and finally our hero has the final showdown, killing his opponent and marching off victoriously with the girl in his arm, burning city in the background, roll credits.

This is the culture of death. The culture wherein death is increasingly proposed is an actual solution to problems.

And thus as the text says here, many today “summoned death, and consider it a friend.” They champion contraception, abortion and euthanasia. They call these things friends, rights, an associate these deathly things with dignity and freedom.

The text also says that they think not aright. For indeed, after many decades of bloody wars in Europe and throughout the world in the first half of the 20th Century, and after aborting and contracepting in even greater numbers in the second half, many parts of the decadent West is beginning to experience the first waves of the population decline. We are discovering that declining populations cannot often perform basic functions such as caring for the elderly and growing the economy. Declining populations lead to declining markets and a declining ability to supply many services.

Thus the text says, summoning death, they deserve to be in its possession. God’s judgment on the culture of death is to hand us over to it. Unless we repent soon we are doomed to become the death we summon, celebrate and call a solution. The final solution will be exacted on us.

Where did all this death-directed thinking come from? The text says simply that those who engage in it are “ungodly.”

We cannot separate the culture of death from secularism and atheism that has largely produced and co-existed with it. Modern atheists are forever decrying all the deaths from religious war. But the truth is that the death toll from secular and atheist systems far outdistances the (disgraceful) death toll due to religious conflict. It is hard to underestimate just how bloody the 20th Century was. The most conservative estimates put the number at 100 million deaths due to ideological and political purposes, not counting the dead of abortion and those who never lived because of  contraception. Faith, whatever its shortcomings, puts a limit on human schemes and solutions. But without God, man moves to the center and is terrifying and despotic ruler who increasingly knows no limits and thinks himself unaccountable.

They said among themselves: Come, therefore, let us enjoy the good things that exist, and make use of the creation to the full as in youth. Let us take our fill of costly wine and perfumes, and let no flower of spring pass by us. Let us crown ourselves with rosebuds before they wither. Let none of us fail to share in our revelry, everywhere let us leave signs of enjoyment, because this is our portion, and this our lot.

And here is described the philosophy of hedonism which sees pleasure and happiness as the chief and sole purpose of human existence in this world. The Greek word hedone means pleasure. Hence, casting aside moderation, (an important key to true happiness), and indulging every excess, our modern world knows few limits.

Most people today see happiness and pleasure not only as a goal but as a right, or as the text says, “this is our portion, this is our lot. Even among the religiously observant there is often a strident rejection of the cross. Many dismiss the demands of faith by invoking God himself (!) “After all,” they say, “God wants me to be happy.” And almost any call to moderation or to the cross for some higher purpose, such as holiness, is set dismissed as almost immoral. “How dare you interfere with my pleasure and happiness!”

And thus the hedonist cry of indignation goes up against every Church teaching that interferes with their indulgence of passing pleasures: This is out portion! This is our lot!”

Let us oppress the righteous poor man; let us not spare the widow

Now in our time social justice is “in.” However the “social justice” that is extolled is a big-government solution that often does oppress the poor. Our intrusive government solutions break the normal bonds of family and thus government welfare and single motherhood are almost synonymous. It is often the case that a woman is financially better off without a husband or father under welfare norms.

In such a system, men among the poor are worse than useless they are harmful. As such they withdraw to the margins and join gangs and engage in criminal activity or descend into addiction. How ever well intentioned, our welfare programs often oppress rather than help and there seems little ability or will to reform the worst and most oppressive aspects of them.

nor do they regard the gray hairs of the aged. But let our might be our law of right, for what is weak proves itself to be useless.

Disrespect for the wisdom of age or the experience of tradition has been rampant in modern times. Even in the Church, we threw overboard the wisdom of centuries in the 60s and 70s. The Church is always in need of reform, but severing our ties with tested wisdom of the previous generations was foolhardy.

In the wider culture, a youth culture predominates wherein old=bad, young =good. Parents, especially fathers are made to seem as buffoons, and fools. Children are all-wise, hip, and clued in.

Adults are too often obsessed with young people liking them. Too many adults seek to be like youths. They obsess about being youthfully thin, and indulge in all sorts of ephemeral fads.

And as the text says, the power and vigor of youth is esteemed, rather that the wisdom of age and mature reflection.

“Let us lie in wait for the righteous man, because he is inconvenient to us and opposes our actions; he reproaches us for sins against the law, and accuses us of sins against our training. He professes to have knowledge of God, and calls himself a child of the Lord. He became to us a reproof of our thoughts;  the very sight of him is a burden to us, because his manner of life is unlike that of others, and his ways are strange. We are considered by him as something base, and he avoids our ways as unclean; he calls the last end of the righteous happy, and boasts that God is his father. …

I have written at some length on the stages of persecution and rather than duplicate all that, you can read it here: Stages of Religious Persecution. But as for this text’s fulfillment today let us merely note recent attempts by Government officials to compel Americans to support same sex unions. Christians are compelled to host and supply services to such “weddings.” Some ministers are also being threatened with legal action for refusing to minster such “weddings.” And clergy in Houston were being required to submit their sermons for review by the Mayor. (More here: Religious Liberty Threats).

This will only grow as increasing numbers in the world find our existence as Catholics and committed Christians “inconvenient” and will not tolerate (to use their word) our reasonable stance that much of what they propose is sinful and contrary to natural law. It is becoming increasingly possible for them to actively persecute us and legally punish us. Little by little all pretense of tolerance by them is being set aside.

This text is increasingly being fulfilled before our very eyes, even here in America where we had thought we had Constitutional rights. The steady erosion of religious liberty may soon lead to a major breach in the dam holding back the flood waters of more open and explicit oppression. For indeed, as the text says, the very sight of us is a burden to them.

Thus they reasoned, but they were led astray, for their wickedness blinded them, and they did not know the secret purposes of God, nor hope for the wages of holiness, nor discern the prize for blameless souls;  for God created man for incorruption, and made him in the image of his own eternity, but through the devil’s envy death entered the world, and those who belong to his party experience it.

Yes, deceived and led astray. Sin darkens the intellect. As St. Paul wrote For although they knew God, they neither glorified him as God nor gave thanks to him, but their thinking became futile and their senseless minds were darkened. Although they claimed to be wise, they became fools (Rom 1:21-22)

Pay attention fellow Christian, our presumption that we are dealing with reasonable people is set aside by this text. Rather, describes them as blinded by wickedness. While it is not for us to attribute this to every person who opposes us, (and it would be uncharitable to do so) nevertheless we must be sober that the collective reality with which we deal is no longer rooted in reason, it is rooted in dark passions and sins.

Analysis of the Synod on the Family
Ex-Gay Man: ‘Homosexuality is Just Another Human Brokenness’