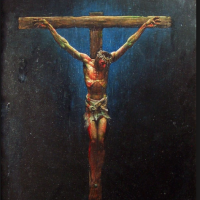 By admin on November 6, 2014 in Uncategorized

From Archdiocese of Washington

Earlier this week we read the magnificent hymn from Philippians, which sings of the Humility of Jesus:

Have among yourselves the same attitude
that is also yours in Christ Jesus,
Who, though he was in the form of God,
did not regard equality with God
something to be grasped.
Rather, he emptied himself,
taking the form of a slave,
coming in human likeness;
and, found human in appearance,
he humbled himself,
becoming obedient to death,
even death on a cross (Phil 2:5-8).

Why this incredible humility? The Christ, the Second Person of the Trinity, had always enjoyed His Father’s love and been praised gloriously by rank upon rank of angels. He had know all glory and all beatitude in the grand perichoresis (the divine dance of love and relationship in the Trinity). The angels, too, in their nine ranks (or choirs) also danced and moved about in astonishing praise.

But now he walked our dusty roads and was perceived to be merely a man from the lowly hick town of Galilee. He who is God (yet seen now only as a man) was loved by some but scorned and mocked by many. “What good can possibly come from Nazareth?” (Jn 1:46) And when His hour came He submitted himself to a shameful death. He who was without sin was identified with the worst of sinners as He hung upon the Cross. Humiliavit semetipsum. (He humbled His very self.)

Why? Why such humility? If I were God (and aren’t you glad I am not), I would probably “solve” the problem of Satan and humanity’s sin by riding down on a lightning bolt, giving Satan the boot, and striking a deep fear within everyone that would command their obedience. We humans would crush power with greater power and combat egotism with a bigger ego. But God humbles himself even unto death, death on the Cross.

Pride is the worse sin and the root of every other sin. It was through pride that Lucifer said “I will not serve.” It was in pride that Adam and Eve believed the lie “You will be gods!”

Pride, colossal pride. How to conquer it? … Humility! Evil is conquered by its opposite, not by becoming the very evil we seek to conquer. If only we could learn this lesson. Instead we who think in human terms often seek to fight what and whom we oppose simply by becoming a bigger and more fearsome example of what we fight.

But the Lord broke the cycle of pride by humility. He broke the cycle of vengeance by accepting the blow without retaliation and with forgiveness. He absorbed hatred but did not return it. He did not beat Satan at Satan’s own game (for in so doing He would lose). He beat Satan by being God, rich in mercy. He did not make light of sin but accepted its full fury and showed us its awful reality.

And in conquering pride by humility He offers mercy to those who will accept it. For even having won, still He does not force His way on us and require us to accept mercy or Heaven. He simply offers them anew and awaits our sovereign answer. Even as the victor His stance is humble (for our pride still needs the remedy of humility, not of overpowering). His hand is extended in mercy. He seeks your reply to His offer of mercy, grace, and truth.

How will you answer Him? Humbly, He awaits your answer.

What are the Obstacles Between Catholic Men and Christ?
The 4 Sins that Cry to Heaven for Vengeance