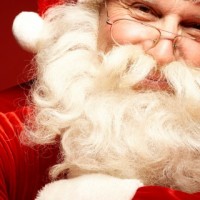 By admin on December 1, 2014 in Uncategorized

From Those Catholic Men

And so, it begins… economists are predicting an estimated 140 million people will go Christmas shopping over the Thanksgiving Holiday. The race to Christmas is underway. It reminds me of a favorite cartoon: two fellas are walking along a sidewalk surrounded by an abundance of Christmas lights and trees, elves and reindeer, tinsel and ornaments. The two pause before a lonely house lacking the holiday glitz of their neighbors. There, on the snow covered lawn is a simple nativity scene: Jesus, Mary, and Joseph huddled under the roof of their manger. One fellow says to the other, “Don’t you hate how some people have to bring religion into everything?”

If we are honest with ourselves, we must acknowledge that Christmas has become a burdensome extension of the frenetic lives we live each day. There is no renewal, no contemplation, no heavenly realization of who we are or even our destiny. We will hear many times throughout the coming month of the need to find the “true meaning of Christmas”, even as we feel helpless to discern a means to discover it.

That is why we need to push back. Christmas has become the non-Christmas holiday. Even casual attention will show that we have reached the point in America whereby we celebrate a thoroughly and utterly secular Christmas. It would be as if we celebrated the 4th of July, with fireworks and picnics and family, and not give thought to the liberty or independence that we enjoy. Oh, wait, we do that too. At any rate, TCM is happy to provide seven suggestions to make your Advent and Christmas season grace-filled and meaningful.

1)   Many of us, at least those who are paying attention, agonize over the hyper-commercialization of Christmas. Thus, and this may be a significant challenge for some, promise your children that they will receive three presents for Christmas. Why? Because Our Lord received three presents from the Magi: gold, frankincense, and Myrrh. If Our Lord only received three presents on the day of his birth, why should our children expect anything more? After all, ask your children what they received for Christmas last year… chances are, they will not even remember (unless you broke down and gave your son or daughter the pony they always wanted). Christmas memories are nearly always centered on family and friends and the time spent together during the season.

2)   While on the topic of presents, perhaps we can return to the tradition of St. Nicholas visiting our homes on Christmas Eve. Some parents have even abandoned the idea of Santa Claus as they feel sheepish lying to their children and despise the greed associated with the old fella. However, since St. Nicholas is real, and if he were to come and visit our homes, parents would only be assisting him with his work and return us to the “true meaning” of Christmas: that, in spite of our unworthiness, God gave us salvation in his only begotten Son, the greatest gift ever given. The gifts brought by St. Nicholas are to remind us of this immeasurable gift of Divine Love.

Most Catholics are not even aware that the anti-Catholic cartoonist, Thomas Nast, in his illustrations that appeared in Harpers Weekly during the Civil War era, maliciously turned our holy saint into an overweight, silly elf (Santa Claus), thus stealing a beautiful tradition from Catholic homes.

Do you want to give a gift seldom to be forgotten? I lived with a pastor during my early years as a priest. He was not an overly affectionate man… okay, he probably did not know what affection meant. But each Christmas Eve, he would give me a envelope that contained a hand-written letter which, sometimes in great detail, would acknowledge the good that I had done as a priest and the blessing he believed I was to the parish. I still have those letters. Imagine the impact a letter written to your son or daughter would have in their life, especially if you wrote the good things many of us men find hard to articulate.

3)   Decorate with abandon during these sacred days, but keep the Christmas crèche the focus of your Christmas adornments. If you do not have one, FIND ONE! Keep the image of the poor Holy Family (Luke 2:24), the ox and the ass (Isaiah 1:3), the star (Genesis 49:17), the shepherds (Luke 2:8), the wise men from the east (Matthew 2:1), visibly present to your family. Rather than harass your children with the “Elf on the Shelf”, allow your children to place a piece of straw in the manger for each good deed they perform during Advent, affording the Christ child a soft, warm bed for his birth. Most especially, open your Bible and read the majestic Christmas story, contemplated for centuries, in Matthew 1:18 and following and Luke Chapter 2.

4)   As a “holiday” corrective, why not return to the idea of “holy day” and attend Mass at midnight or on Christmas Day? Earlier Masses, at 4 PM or 4:30 PM, which are always directed toward children, communicate to our children that the spiritual side of Christmas is a hurdle or an obstacle to endure prior to all the fun yet to come. It is a poor precedent that clearly trains our children in a manner unworthy of the feast or holy day we are celebrating.

5)   There is another tradition surely to literally transform the lives of yours sons and daughters at Christmas and thereafter: be of service to the poor, the elderly (many of whom feel abandoned), abandoned children, our servicemen (who experience the greatest suicide rate during the holidays), priests or religious, or the lonely. There is no greater opportunity to turn the hearts of your children forever to the good than if you, their father, were to organize some effort to assist those in need: shovel snow for the elderly, deliver goods to the poor, console those who mourn, give comfort to the marginalized, enjoy a cup of hot chocolate with the elderly in their home. These actions need not be extravagant; we only need to re-learn how to be attentive to one another.

6)   Most importantly for your family: be creative and establish your own non-commercialized traditions within the family. Better yet, why not talk to the elderly of your family and rekindle those traditions which have been needlessly pushed aside by the commercial interests of these holy days? No doubt, there will be protests and eye rolling, but within a year or two, if you persevere with patience and love, your family will look forward to these traditions and will be celebrating them with your grandchildren and great grandchildren long after you have departed this world.

7)   Most importantly, remember that Christmas, in the Catholic tradition, is an Octave. This means that, for the seven days following Christmas, each day is celebrated as a solemnity, a “Christmas Day”. After all, it is the birth of God-made-man! What he was, he remains (God), what he was not, he assumes (humanity). One distracted day is not nearly enough time to contemplate this Sacred Mystery. Therefore, Christmas should be observed from December 25 through to January 1st, the Feast of the Mother of God. We have become so accustomed to celebrating Christmas during the weeks of Advent, a season of preparation, nothing remains for the true feast. All a family need do is save the festive spirit and celebrate the Birth of Christ, leisurely, during those blessed days of winter! Of course it will be awkward the first year, but you will quickly establish a new tradition that will reorient your family to the real and more meaningful purpose of Christmas.

These suggestions and correctives will definitely take a significant amount of work. It will require communication and patience and love. But the reward is entirely worthy of the effort you make with your family. You can give your sons and daughters a life-giving experience that embraces the original intent of the Church in celebrating Christmas: an experience that is both formational and transformative. And none of that cannot be purchased or bought in a mall or a shopping center.