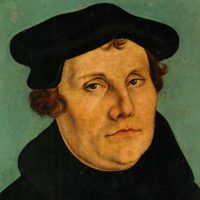 By admin on October 30, 2017 in Uncategorized
In presenting the picture of Martin Luther I want to be completely objective, and rely on the authority of some of the most reputable scholars available, many of whom are non-Catholics.

During the last century, especially since 1883, the four hundredth anniversary of the birth of Luther, there have been two Luthers – one of panegyric, romance and fiction, and the other the Luther of fact. Since the 450th anniversary of the beginning of the Protestant Reformation is being commemorated this year, these TWO Luthers are still being presented. Only recently an ardent clerical Catholic ecumenist wrote that the Catholic Church now admits that it has been wrong all along about Martin Luther, and that he really deserves to be canonized as a saint. On the other hand, most historians presenting facts give quite a different account. These facts about Luther I will briefly present, and let you be the judge.

Dr. Guilday, former history professor at the Catholic University, summed up the work of Luther’s life this way: “The cleavage of Luther from the Catholic Church was not caused by opposition to the Papacy, but by the false idea, which seems to have haunted him unto obsession – his total impotency under temptation. It was this negation of the moral value of human action – this denial of man’s ability to overcome sin – which led to his famous doctrine of the worthlessness of good works. The only hope he had was a blind reliance on God, whose Son, Jesus Christ, had thrown around him the cloak of his own merits. From this starting point it was facilis descensus Averni. Opposition to all good works, and particularly to Monastic regulations and to Indulgences, led to opposition to authority – Episcopal and Papal.”

The facts of Luther’s life bear out the truth of this statement.

Martin Luther was born in 1483; he was the second oldest of eight children. The discipline in the home appears to have been strict by modern standards, but this could hardly have affected his later life, as some contend. He was a good student, and his father decided that his son should study law, and thus bring some prominence to the family which was very poor. The first four years of Luther’s studies were devoted to liberal arts, principally to the study of Latin, Greek, philosophy and ethics.

But it was in his moral conduct and teaching that Luther was foul-mouthed, scurrilous – even obscene. Most historians declined to print his vile talk. His slogan “Sin bravely, but believe more bravely,” gives the clue to his thinking. He advised priests and nuns to marry as he had done; he urged the State to abolish all monasteries and convents, and many States did. He preached that chastity outside of marriage is an abomination – that the vow of chastity is worse than adultery. He counselled concubinage and immorality for husbands – also divorce and remarriage at the husband’s will.

In his “Table Talks” he speaks jokingly of his sex relations with the mother of his six children. “I confess, he writes, “that I cannot forbid a person to marry several wives, for it is not contradicted in Scripture. – I myself could not and would not abstain from impurity.”
Nearly all historians agree that Luther was the instigator of the horrible peasants’ insurrection, and Luther admits it. Over 100,000 peasants were killed, but Luther was not disturbed. One historian remarks that he celebrated the event by marrying the nun, Catherine Bora.
Some insist that Luther reformed the Church; he did NOT reform it – he tried to DESTROY it as far as he could, and left a worse spiritual and moral order. Unquestionably, the Church needed reforming, and Luther did a good turn for the Church insofar as his preaching and writing aroused the Pope and Bishops from their complacency, and the Council of Trent resulted. Nor is the fact that the Church has been broken up into some 400 sects, all contending that theirs is the one true Church that Christ founded – any credit to Luther.
Luther toward the end of his life suffered much from disease; he was filled with remorse and often yielded to fits of anger, sparing neither his wife (?) nor his friends. One of his regrets was that he had said Mass for 15 years. In his last sermon he sharply criticized the monks for refusing to discard their habits. On his deathbed he answered to the question put to him by a disciple, that he persevered in his doctrines. On the wall, near his bed, the doctor found this inscription in Latin: “I was your plague while I lived; when I die I shall be your death, O Pope.”
“The least saintly of men,” an English Protestant Bishop said of Luther – hardly a worthy candidate for canonization! Do you agree?
From Rorate Caeli
Materialism
How To Respond When Asked If You Support Gay ‘Marriage’