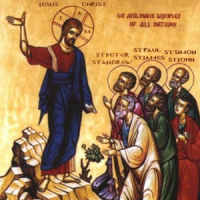 From Patheos by Fr. Dwight Longnecker

At a priest’s conference not long ago the speaker quoted some statistics. Christians of different traditions were asked percentage wise how important evangelization was to their understanding of the Christian faith.

We Catholics skate around this one muttering catch phrases like “The New Evangelization” and we trumpet the few evangelization enterprises that are going on, and we self righteously quote St Francis (who never actually said it) “Preach the gospel at all times. Use words if necessary.”

There are some very clear reasons why Catholics don’t evangelize, and they are difficulties that run right to the foundation of our understanding and practice of the faith.

There may be more reason than these, but here are ten I can think of.

PS: I’ve saved the biggest and the worst for last….

1. Cultural Catholicism – A lot of American Catholics regard their religion like Jews do. It’s something you’re born into. They scratch their head at the idea that someone would convert to Catholicism. “What, you mean you chose to be Catholic?” This is because they’re Polish or Irish or Italian or Lebanese or French. They’re Catholic in their bloodstream. It’s something you are, not something you do so much. I remember encountering a French woman in South Carolina who wanted her baby baptized. I asked her what parish she went to. She looked at me with bewilderment. “But I aim Frensh! It is different in France! Nobody goes to church, but we are very Catholic!” Cultural Catholics never imagine that they should evangelize. “So I’m supposed to make you an Italian?” You see what  I mean.

2. Over Sacramentalization – That’s just a long word way of saying that Catholics put sooo much emphasis on the sacraments that it is difficult for many of them to see that in and through and below the sacramental system is a genuine encounter of the person with Jesus Christ, risen ascended and glorified. Because you have to be a Catholic to receive the sacraments of Holy Communion and confession, and because for so many Catholics that is the only way to practice their faith, the sacraments actually keep them from evangelizing. “I can’t bring my Baptist neighbor to Mass. She wouldn’t know what was going on and besides, she can’t come forward for communion anyway.” This is a good point. If you invite a neighbor of family member to Mass then tell them they can’t receive the Lord the whole exercise is likely to collapse into them feeling excluded.

3. RCIA – What is that? An company that used to make electronics? The whole RCIA system is often cumbersome and user-unfriendly. If you have someone who is interested in becoming a Catholic you have to tell them about RCIA which starts in the fall (so what do you do when they come in April?) and goes through for months until Easter. Meanwhile Pastor Bob at the local Protestant church says, “Come to church. Sign up. You’re in.” Proper catechesis is necessary, but a more creative and flexible approach would help.

4. Church or Jesus? – Too many Catholics confuse evangelization with getting people to join the Catholic Church. The primary task of evangelization is meeting people where they are are introducing them to Jesus Christ. It is possible to do this without bringing in the Catholic Church with its whole devotional and sacramental system. It is possible to talk to someone in need and say, “You need to get right with God. You need to say, ‘Lord Jesus Christ, Son of God have mercy on me a sinner!’ That’s the first step.” After they make that decision they can start to attend church and learn about the sacramental system and how to continue their relationship with Christ as a Catholic. The reason so many Catholics have a problem with this is because they are unsure whether they themselves have ever had that fundamental, rock bottom, first step conversion transaction.

5. Social Gospel – A lot of Catholics think the church’s primary way of evangelizing people is by helping them. It’s true that an important aspect of evangelization is social welfare. Feeding the hungry, housing the homeless, healing the sick, bringing justice to the oppressed–all of that is good stuff and must not be neglected. It is also a powerful witness to the authenticity of the Catholic message. However, just doing that isn’t enough. We need to give people the Bread of Life as well as a sandwich. Many Catholics would never breathe a word about their faith, but are busy in the soup kitchen. Soup kitchen is good. Actively sharing the faith is also good and necessary.

6. Ignorance – too many Catholics simply don’t know their faith well enough to share it.

7. Professional Catholics – For so long everything in the Catholic Church was done by the “professionals.” Priests, bishops, sisters and brothers were the ones who ran the parishes, dioceses, schools and colleges. They were the ones who were trained to do all the “church work”. Lay people were there to pray, pay and obey…or not. But this clericalism still dogs the church. The people in the pew don’t take ownership and don’t feel it is their job to evangelize.

8. Slack Use of Resources – I should specify. There is no lack of resources. In fact, there are more resources than we can handle. The resources are professionally produced, orthodox, relevant, attractive and dynamic. It’s not the lack of resources as much as it is the lack of people who will use the resources. How many good Catholic videos languish on the shelves because people just can’t be bothered to watch them and share them? How many books, pamphlets, booklets and training courses gather dust because no one can be bothered to use them? The same for websites, diocesan seminars, seminary training days etc. etc. etc. There plenty of good resources.

9. Indifferentism – This is the widespread feeling (and teaching) that all the Christian denominations are pretty much the same and it doesn’t really matter which one you go to. It’s consumerism. Choose the one you like best. This indifferentism is widespread in our culture and widespread in the Catholic Church. Furthermore, it extends to non Christian religions and no religion at all. Huge numbers of Catholics think it is perfectly okay if a person attends not only another Christian church, but follows a different religion. “We’re all climbing the same mountain. We’re just going up different paths!” That is a load of codswallop. Any casual study of the different world religions will show that they are not all equal. Some are superior to others simply from a human perspective. Likewise with the different Christian denominations. This is sentimental clap trap.

Do people who say this really believe it? No. Otherwise they would have to agree that a rattlesnake handling Pentecostalist from Kentucky is equal to St Francis. Would they look at the wild eyed Westboro Baptist crowd or an anti Semitic, racist Catholic fundamentalist and say benignly, “Well, we’re all pretty much the same. They’ve simply chosen a different path up the mountain.” And yet indifferentism is rife in the American Catholic Church, and that’s why Catholics don’t evangelize: they don’t think they need to.

10. Universalism – the ugly twin sister of Indifferentism is Universalism–the teaching that God loves everyone so much that he would never send anyone to hell. In other words, in the end, everybody will be saved.  Why bother if we’re all going to get into heaven simply because God is such a nice Santa Claus type figure in the sky who will make sure everyone succeeds? Like indifferentism, the Catholic Church is riddled with universalism and it’s cowardly half breed sister semi-universalism. This is the belief that there is a hell and there might just be a few people there, but there won’t be many and maybe even the ones who are there will serve their prison sentence and be allowed into heaven after all. Universalism is a cowardly, unScriptural and unChristian. It doesn’t take a Thomas Aquinas to figure out that this teaching means not only the death of evangelization, but eventually the death of the church.

Why Jesus Comes Into The World
What Should We Do About Natural Law?