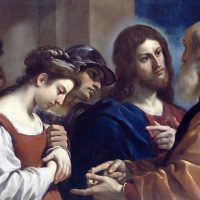 By admin on September 13, 2017 in Uncategorized

I am a watchman, a lover of souls, a guardian and one who has been commanded by Christ to speak to a brother who sins.

A few years ago a certain famous Catholic posed the following rhetorical question: “Who am I to judge?” It was a question heard ’round the world. Although the remark was taken out of context (he was speaking of a person with sinful and disordered tendencies who was living uprightly nonetheless), the world didn’t care. For a sinful, slothful world to hear a clergyman say, “Who am I to judge” was a cathartic victory. “Yes!” a jubilant but jaded world acclaimed. “The mean, hateful, judgmental Church has been tamed. All is well. Everything is just opinion. No one has the right to judge me!” Never mind that the very ones who are telling us not to judge are enacting a moral law in their very act of banishing moral law; they are making a judgment in the very act of forbidding judgment. Logic and rational consistency do not seem to be necessary in times like these.

The question “Who am I to judge?” is not really a rhetorical question, though. It actually has an answer—in fact many answers. Let’s look at some of them, especially in the this past Sunday’s (23rdSunday of the Year) focus on fraternal correction.

Who am I to Judge? I am a watchman. Scripture says, Son of man, I have made you a watchman for the house of Israel; whenever you hear a word from my mouth, you shall give them warning from me. If I say to the wicked, “You shall surely die,” and you give him no warning, nor speak to warn the wicked from his wicked way, in order to save his life, that wicked man shall die in his iniquity; but his blood I will require at your hand (Ez 3:17).

Thus I am commanded, under pain of the loss of my own soul, to correct the sinner. This requires that I judge, according to the Lord’s teachings, what is right from what is wrong, and that I must warn those who persist in sin unrepentantly or who celebrate sin. If I fail to do so, I become part of the problem and will share in the penalty.

Who am I to Judge? I am a lover of souls, called to concern for the salvation of all. Scripture says, You shall not hate your brother in your heart: rather, you shall rebuke your neighbor, and not suffer sin upon him (Lev 19:17).

Notice how this text equates a failure to correct the sinner with hating him. This is precisely the opposite of what many people say when they equate any rebuking of sinful behavior with “hate speech.” However, it is those who wink at sins who are acting hatefully and promoting trouble for souls (see Proverbs 10:10).

St. Thomas sets forth fraternal correction as an act of charity, for to love is to will the good of the other. Being free of sin and on the road to salvation is good for the other.

This Levitical text above reminds us that if we love others we cannot suffer sin to be upon them because sin promotes suffering and endangers salvation.

Scripture also says, Whoever turns a sinner from the error of his way will save him from death and cover over a multitude of sins (James 5:19).

In judging what is right from what is wrong, I am acting as a lover of souls who does not want to see others die in their sins.

St. Paul goes so far to command the community of Corinth in regard to a certain sinner: You are to deliver this man to Satan for the destruction of the flesh, that his spirit may be saved in the day of the Lord Jesus (1 Cor 5:1). In other words, Paul instructed the Corinthians to excommunicate him, thus exposing him to the full effects of his sin. Note that this was not done for vengeance; it was a loving, last effort to save the man’s soul before the last judgment.

Who am I to Judge? I am a guardian, called to protect the Church, my family, and the world from wrongdoing. St. Paul warns that Bad company corrupts good morals (1 Cor 15:33) and that a little leaven (i.e., evil) leavens the whole lump (Gal 5:8).

Thus, in correcting the sinner, we are concerned not only for him or her, but for the community and the common good as well. Sinful and disordered behavior is harmful to community. Not only does it bring suffering to the sinner and others affected by the sin, but it also gives scandal and may incite unhealthy responses such as vengeance or hateful anger.

There are times when, after repeated correction of the sinner fails, we must purge the sinful influence for the sake of the community. St. Paul says, We instruct you, brethren, in the name of our Lord Jesus Christ, to shun any brother who walks in a disorderly way and not according to the tradition they received from us (2 Thess 3:6). Here, St. Paul seeks to preserve the community from disorder and heresy. He also declares, I wrote to you not to associate with anyone who bears the name of brother if he is guilty of sexual immorality or greed, or is an idolater, reviler, drunkard, or robber—not even to eat with such a one. Is it not those inside the church whom you are to judge? (1 Cor 5:11)

These more severe methods are sometimes necessary to reach a hardened sinner as well as to protect the community. Once again, this requires judgment.

Who am I to Judge? I am one who has been commanded by Jesus to do so. Jesus sayid, If your brother sins, go and point out his fault, just between the two of you. If he listens to you, you have won him over (Mat 18:15).

The clear mandate of the Lord to set others right. This is not possible without first judging what is right from what is wrong based on the Lord’s teaching. Then, having observed wrongdoing or error, we must seek to correct it.

The Lord expects us to correct people we know and who are in sin. We ought to do it in humility and with love, but we are to do it. This is especially true if we are in a role of leadership or prominence: a pastor, teacher, parent, or elder.

In all of these senses, who are you not to judge?

There are certain judgments that we cannot make. For example, I cannot judge that I am holier than you, or that you are more holy than I. Scripture says, Man sees the appearance, but God looks into the heart (1 Sam 16:7). I cannot tell you if someone is in Hell; only God can make that judgment. I am also forbidden the “judgment of condemnation,” wherein I am unnecessarily harsh in punishments or conclusions. In this regard, Jesus, using the poetry of couplets, says, Do not judge and you will not be judged; do not condemn and you will not be condemned (Luke 6:37). Indeed, the Lord further issues this warning regarding unnecessarily harsh judgments: For in the same way you judge others, you will be judged, and with the measure you use, it will be measured back to you (Mat 7:2).

None of this is a mandate for silence in the face of sin or wrongdoing. We must judge between good and evil; we cannot shirk our duties to correct error and to rebuke sin in others. Who am I to judge in this regard? I am a watchman, a lover of souls, a guardian, and one who has been commanded by Christ to speak to a brother who sins. And just we are called to correct, we must also be open to correction ourselves.

Here is a final word from Paul, reminding us of our need to judge what is right from what is wrong and compassionately call to those lost in error and sin:

Brethren, if a man is overtaken in any sin, you who are spiritual should recall him in a spirit of gentleness. Look to yourself, lest you too be tempted. Bear one another’s burdens, and so fulfill the law of Christ (Gal 6:1).

From the National Catholic Register