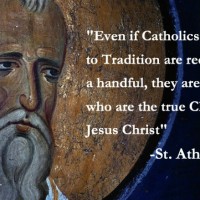 SOMETHING UNHOLY IS STIRRING

For the past two years I have been confiding to close friends my own growing sense that something is happening, that something unholy is stirring. I have spoken with others who have admitted the same suspicion. The way I have tried to describe it in the past is like the rumblings felt just before a volcano explodes.

Now, I find myself wondering if the eruption is upon us.

Who could ever conceive of atrocities like those we are seeing executed in the name of religion? Where once we might see coverage of a tragic conflict far away, we now face an evil that is not confined to some distant corner of the planet. With the always-on, near-instant spread of information in our digital age, your next door neighbor can be radicalized from the comfort of their living room.

What we are facing is, first and foremost, a form of spiritual warfare. In a time where violence is rampant and the innocent are threatened, it is true that we must be ready to physically engage the malefactors. But if we deny the spiritual nature of this surge of evil we are facing, we will have no hope of victory.

When confronted with atrocity, the immediate reaction of most people is, “What can we do to stop it?” Yes! That is the exact question we need to be asking. Summoning us to courage, St. Augustine challenges us to do battle: “Hope has two beautiful daughters: their names are anger and courage. Anger that things are the way they are. Courage to make them the way they ought to be.”

But to begin to answer the question of what we can do, we must first properly assess where we are. What are our capabilities? How is our strength? What is the state of our conditioning? Without this kind of brutal honesty, we are likely to flounder rather than fight.

Jesus warned, “Beware that your hearts do not become drowsy from carousing and drunkenness and the anxieties of daily life, and that day catch you by surprise like a trap. For that day will assault everyone who lives on the face of the earth” (Luke 21:34-35).

And yet isn’t that exactly what has become of us? Consider this sobering analysis of our present condition from columnist Jeffrey Kuhner at the Washington Times:

For the past 50 years, every major institution has been captured by the radical secular left. The media, Hollywood, TV, universities, public schools, theater, the arts, literature — they relentlessly promote the false gods of sexual hedonism and radical individualism. Conservatives have ceded the culture to the enemy. Tens of millions of unborn babies have been slaughtered; illegitimacy rates have soared; divorce has skyrocketed; pornography is rampant; drug use has exploded; sexually transmitted diseases such as AIDS have killed millions; birth control is a way of life; sex outside of wedlock has become the norm; countless children have been permanently damaged — their innocence lost forever — because of the proliferation of broken homes; and sodomy and homosexuality are celebrated openly. America has become the new Babylon.

This cultural assessment is bleak. And I believe that underlying it all is a deeper evil, a more ancient and intractable error which gives rise to all the rest. Many have pointed to “Modernism” as the heresy of our times. Modernism, while it takes many forms, is basically a break or rejection of our past in favor of all things new. And, while it seems evident that our Church is fully infected with the heresy of Modernism, I believe that it, too, is a symptom of this more fundamental threat.

What am I referring to? Something that impacts the very nature of human existence and the opportunity for our salvation. Lacking an official name, I call this monster, “Stealth Arianism.” Students of history know that the Arian heresy – the worst crisis in the Church before our present age – was rooted in the belief that Jesus Christ was merely a created being, not equal to God the Father. Stealth Arianism follows the same fatal error, but with a twist: while the Arians of the fourth century openly denied Christ’s divinity, today‘s Arians will profess Jesus as God, and yet through their actions deny it. In other words, they don’t even know they are heretics. Many even believe that they are doing God’s work in their attempts to elevate Christ’s humanity at the cost of His divinity.

You see, once we diminish the identity of Christ as the Son of God, we are left to view Him as simply a historical figure that was a nice guy, a respectable teacher and a good example for how we are to live. Religion is then reduced to a nice organization that does nice things for people as we seek a kind of psychotherapy for self-actualization. And this is not only not what He came to give us, but it’s something He made sure to leave no room for.

How do we recognize this pervasive Stealth Arianism?” There is a story of two friends – a Catholic priest and a Protestant minister. They stood in the doorway of the priest’s church, staring at the tabernacle in the sanctuary at the other end. The Protestant minister said to his priest friend, “You don’t believe that is God in that tabernacle.” The priest was startled, and said, “What do you mean? Of course I do.” The Protestant minister said, “Listen, if I believed that was God, I would, right here and now, fall prostrate on my face and crawl toward that tabernacle, with tears of joy running down my face … you don’t believe that is God.”

Over the past 50 years, the Stealth Arians have done everything within their power to remove from our lived experience of Catholicism anything that would point to the divinity of Christ, and the supernatural quality of our faith. Everything has been stripped from our churches – sacred art, sacred architecture, sacred music, and the sacred elements of the Holy Sacrifice of the Mass – and we are left in the barren desert of the banal. It is no wonder many Catholics think nothing of approaching the Most Holy Eucharist dressed in a t-shirt, shorts, and flip-flops, and grabbing the host like they’re reaching into a bag of chips. As Flannery O’Connor said, “If it’s a symbol, to hell with it.” It’s more surprising that these individuals even bother to attend Mass at all.

Moreover, the Stealth Arians have deliberately chosen to keep their teachings muddled, ambiguous and elusive in an effort to increase “pastoral sensitivity” as the highest of all values, which keeps people feeling good about themselves just the way they are – though never challenged to strive for sainthood! Of course, when people like the way their church makes them feel about themselves, that keeps the money flowing into the collection basket. But whether confused and uncertain, or simply spiritually blind for lack of true pastoral care, the faithful who have been abandoned by their spiritual leaders are prone to be conformed to the world and its prince, a murderer and liar from the beginning.

In the second reading this Sunday, St. John says, “Children, let us love not in word or speech but in deed and truth” (1 John 3:18). Not many today openly deny the divinity of Christ by their words, but far too many deny His divinity by their actions.

In the Gospel this Sunday, Jesus says, “Just as a branch cannot bear fruit on its own unless it remains on the vine, so neither can you unless you remain in me. I am the vine, you are the branches. Whoever remains in me and I in him will bear much fruit, because without me you can do nothing” (John 15:4-5). When we deny His divinity – and our actions prove that – we are cut off from that supernatural power to bear the fruit of becoming great disciples, great husbands and wives, great parents, and great citizens. Without that divine life – state of grace – we are left to become base and savage … merely homosapiens … just another animal species, satisfying our base desires. THAT is why our world is the way it is today!

Until we start worshiping and serving God, believing He is REALLY God, we are disconnecting from the vine … disconnected from the divine life and power of God!

Yesterday we celebrated the feast of St. Athanasius; a bishop who stood with a very small remnant against the pervasive Arian heresy of his day. “Stealth Arianism” is rampant in our times. It will get worse before it gets better, especially if the Supreme Court redefines marriage. Are you prepared to be a St. Athanaius today?

The Battle Over the Sexes: Catholic Perspectives on the Gender Debate
The Paradoxical Connection Between Love and Law