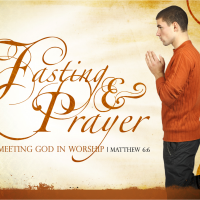 From Those Catholic Men

Lent is a time of penance, but does penance have a role in the Christian life throughout the year? St. Benedict said in his Rule that the life of the monk should be a perpetual Lent, though few have strength enough for it! Lent does highlight and intensify the role of penance, but as we are making our Lenten practices right now, we should also be thinking how our lives can bear the fruits of Lent throughout the year.

Penance is an essential and even obligatory part of the Christian life. This can be seen in the fact that Confession requires the performance of penance and in the mandated days of fasting and abstinence. Beyond these expressions, penance has played a large role in the Christian life, primarily through reparation and meritorious suffering, although this centrality of penance has been eclipsed in our time. The lessening focus on penance is nothing short of a spiritual and cultural crisis that must be addressed for renewal.Really this decline in penance is of very long standing. The origins and development of Lent itself show this increasing laxity. Lent originates in the period of intense preparation before the Easter Vigil, when the elect would engage in long periods of prayer and penance. The practice spread to the rest of the faithful and extended to its current length. Originally, Christians fasted the entire day and practiced abstinence throughout Lent, although the length of the daily fast gradually shortened throughout history. Nevertheless, even sixty years ago it entailed at least some fasting and abstinence every day.Currently, here are the prescriptions on penance from the Code of Canon Law. Notice how every Friday and all of Lent are considered days of penance:

Canon 1250  All Fridays through the year and the time of Lent are penitential days….

Canon 1251  Abstinence from eating meat or another food according to the prescriptions of the conference of bishops* is to be observed on Fridays throughout the year unless they are solemnities; abstinence and fast are to be observed on Ash Wednesday and on the Friday of the Passion and Death of Our Lord Jesus Christ.

[*The US Bishops allow the substitution of another penance on Friday in place of abstinence from meat.]

In response to the Church’s requirement of penance, we can ask—what is the logic of penance and why is it so important to the Christian life?

Most generally, penance is integral both to reparation for our sin and also of merit by which we perform acts of charity. Both of these endeavors are linked to our participation in the Cross of Christ. As St. Thomas says: “In order to secure the effects of Christ’s Passion, we must be likened unto Him” (Summa Theologiae III, q. 49, a. 3, ad 2). St. Paul says it more mysteriously: “ Now I rejoice in my sufferings for your sake, and in my flesh I complete what is lacking in Christ’s afflictions for the sake of his body, that is, the church” (Col 1:24). The only thing lacking in Christ’s suffering is our participation in them, a participation which conforms us to Christ who offered himself out of love. Paul also tells us: “present your bodies as a living sacrifice, holy and acceptable to God” (Rom 12:1). In penance, we offer ourselves in love, sharing in Christ’s sacrifice of his body.

That is the general logic of penance, but we can also look more particularly at a number of reasons why we do penance.

First, Jesus instructed us to do so and described penance as strengthening our life of prayer. During the Sermon on the Mount (Mt 6), Jesus gives us an overview of penance and the right disposition to practice it, emphasizing almsgiving, prayer, and fasting, the three major penances emphasized in Lent. That Jesus envisioned his disciples fasting after his death is clear: “The days will come, when the bridegroom is taken away from them, and then they will fast” (Mt 9:15). Jesus also related that fasting adds power to spiritual works, particularly the expelling of some demons that could only be “driven out by anything but prayer and fasting” (Mk 9:29). Jesus, of course, also gave us the example of fasting, especially during his 40 days in the wilderness. We can also look to the Acts of the Apostles as evidence that the early Church followed Jesus’s example (cf. Acts 14:23).

Second, we all have to make reparation for our sin.

But sin also injures and weakens the sinner himself, as well as his relationships with God and neighbor. Absolution takes away sin, but it does not remedy all the disorders sin has caused. Raised up from sin, the sinner must still recover his full spiritual health by doing something more to make amends for the sin: he must “make satisfaction for” or “expiate” his sins. This satisfaction is also called “penance” (1459).

Even when sin is forgiven, if contrition is not perfect, there is still temporal punishment due to that sin. If penance is not done for this temporal punishment, the effects of sin and the punishment due to it must be cleansed in Purgatory. (Indulgences provide relief for this punishment, and stand in place of penance. Keeps this in mind for the extraordinary Jubilee Year of Mercy beginning this coming December 8th.) It was central to the piety of the Middle Ages to offer Masses for the souls in the purgatory, with even priests dedicated completely to this work of mercy.

Third, prayer and penance can be an apostolate. The Catechism describes how we are united together in Christ and must assist one another spiritually: “The Christian who seeks to purify himself of his sin and to become holy with the help of God’s grace is not alone” (1474). The divine mercy devotion emphasizes prayer in reparation for sin, especially by recitation of the chaplet of divine mercy: “Have mercy on us and on the whole world.” St. Faustina heard, in private revelation, Jesus asking her to “gather all sinners from the entire world and immerse them in the abyss of My mercy” (206).

Just as Jesus related in relation to the expelling of demons, penance makes this prayer for sinners all the more powerful. Our Lady of Fatima told the three children: “Pray, pray very much. Make sacrifices for sinners. Many souls go to hell, because no one is willing to help them with sacrifice” (Our Lady of Fatima, July 13, 1917). This is the heart of her message both at Lourdes and Fatima: to pray the rosary and to make sacrifices for sinners, “especially those in most need of mercy.”

To conclude, here are some ways to make penance a part of your life:

It is odd that there was more penance when life was harder. Now there is less when life is easier. We could say that penance is more necessary than ever before as our society is moving further and further from God. We can do our part in restoring things by uniting not only our life but the lives of others to the redemptive power of the Cross through embracing a fuller life of prayer and penance.