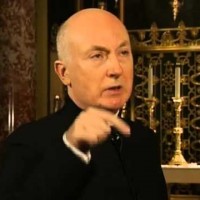 The Constitution of Ireland begins: “In the name of the Most Holy Trinity, from Whom is all authority and to Whom, as our final end, all actions both of men and States must be referred, / We, the people of Éire, / Humbly acknowledging all our obligations to our Divine Lord, Jesus Christ . . .”

The landslide vote in Eire for legalizing the fictitious form of marriage between persons of the same sex, in contradiction of all laws natural and divine, unearths the pulsating Druidism that Saint Patrick and his fellow saints defied. The estimated $17 million from pressure groups in the United States is no excuse, for people will only be pressured if they are willing to be pressured. Another dismal fact is that over 90% of the young people influenced to subscribe to this vote were formed in Catholic schools. The vote was less in favor of inversion and more in hostility to a Church whose Jansenism and clericalism had incubated corruption and lassitude. While most of Europe suffers from the deadly sin of indifference, or sloth, Ireland is in adolescent rebellion, virulent and irrational. This was exploited by political interests hostile to Christian civilization, and their propaganda combined legitimate accusations against ecclesial failings with a left-wing, secularist agenda.

Ireland helped to bring the Faith to America, and when the flourishing of that Faith degenerated here, that donation was returned in the form of a bacillus. Ireland today has among the highest rates of suicide and mental illness in all Europe, and one-third of children there are born out of wedlock. Things are worse in the United States. Look at the Saint Patrick’s Day Parade in New York City to see what happens when the honor of a saint is dishonored, and when ambassadors for Christ become nothing more than goodwill ambassadors.

What happened in Ireland was not sudden. Like a dead elephant that remains standing for a short while before collapsing, so the Flame that Patrick kindled on Tara had died long before Catholicism was mixed up with political causes, and ethnic drollery replaced dogma. In mordant irony, just a few weeks ago the Stormont in Northern Ireland rejected a motion favoring same–sex unions, a motion more indicting for having been introduced by the Sinn Féin, which had long persuaded naïve Americans that it was a Catholic cause.

The Archbishop of Dublin, hardly a firebrand, said: “Marriage is not simply about a wedding ceremony or about two people being in love with each other. Marriage, in the Constitution, is linked with the family and with a concept of family and the mutuality of man and woman as the foundation for the family.”

In light of the fine invocation of the Irish Constitution, the Irish vote is worse than perverse: it is blasphemous. All the great saints of once-verdant Ireland would have used stronger language.