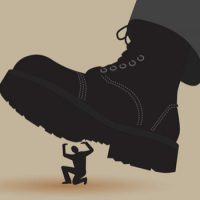 Events at the college where I teach have me thinking about the ersatz religion known as ideology.

What are the signs that mark the difference between believing in God and asserting that if only everyone on earth would accept, let us say, the gender ideology of the secular west, we would bring about a golden age of justice and plenty?

The bell tolls, and the monks of the Grand Chartreuse make their slow way in silence to the chapel. They chant the holy office while the stars grow dim in the twilight before the dawn. There is no hurry, no frenzy. They pray for the world, and their lives are more closely bound up with the rhythms of the earth than are those of men just then awaking in the city, to shave and dress and hurry to catch the train to work. But in their being so bound, they are free: I shall go in unto the altar of God, of God, who gives joy to my youth.

There is rest in their faith, but there can be no rest in ideology. Indeed the ideologue looks upon their prayer as quaint and pointless at best, and at worst a waste of human potential, even a culpable refusal to put their shoulders to the wheel of revolutionary change. The ideologue has no use—no use, for all things must be used—for what Christopher Lasch happily called the true and only heaven. The monk knows that no matter what political regime should come to power, this world, so beautiful and so bittersweet, will always be a world of sin and death; it will always be less of a home than a wayside inn. And if the inn’s sign is hanging from a broken nail, and the bed sheets are a little musty, and the roast beef is overdone, it does not matter too much, because he himself, he considers with a smile, stoops in the shoulder, and is a little musty and overdone too.

But the ideologue has no clear sense of the pilgrimage. He believes in progress, and the imperfections of the world offend him; they must be eliminated. Fortunately for him, those imperfections are external to his person. Sometimes they are social conditions, including those that come naturally to mankind, such as the stubborn particularities of the family. Sometimes they are persons who ought to lose their jobs for a crime of least dissent; or to be re-educated by a regimen of ridicule, emotional manipulation, and threats; or, when the ideopathy is particularly virulent, to be cured by a haircut from the national barber, a purgative stay hacking at permafrost in a gulag, or a bullet in the back of the brain. Ideology does not forgive.

Ask the aged monk with the trembling hands, “Pilgrim, where are you going? Can you describe the place?” He may reply with the words of Saint Paul, that eye has not seen, nor ear heard, nor the mind of man conceived the glory that the Lord has prepared for those who love him. He has the spirit of the pilgrim Dante, scaling the last slope of the mountain of Purgatory:

Will above will now surged in such delight
to climb the mount, with every step I took
I felt my feathers growing for the flight.

If you pressed him and asked him what he longs for in heaven, he will reply not with a what but a whom: not a state of affairs, but a person; not an abstraction, but the Incarnate Christ, seated at the right hand of the Father. “See, my flesh is true flesh,” says the Lord.

Ask the ideologue, “What is the aim of your progress? Can you describe it?” If he does more than stutter, he will place before your eyes a Nowhere, his secular heaven. It may be the Dictatorship of the Proletariat. It may be Charlotte Gilman’s Herland, that stardust place where females are as stout and strong as males, and all things are run by the life-loving feminine genius. It may be a world of sexual license, material wealth, and social control exercised by the high priests of the judiciary. It may be the impossible dream of absolute equality in all respects: universal Stepford. It may be the Third Reich, with its goose-stepping comic-book worship of Germanic paganism, and grotesquely muscled supermen stripped for the fatherland. It may be a global state, with no borders but the reinforced steel walls between high financiers and ordinary mortals.

Whatever it is, from afar off it may look handsome, but when it draws near, you see the pocks and the pustules, and smell the liquefying meat. Yet the true ideologue will commit himself all the more energetically to the ideology in proportion as it does not deliver on its promises, and here alone perhaps we see progress: what is ugly or futile or absurd at first he denies; then he observes it but condones or excuses it; at last he praises it as a positive good. So have we gone from denying that feminism will accelerate the breakdown of the family, to observing the breakdown but accepting it as necessary for the fulfillment of women’s aspirations, to calling fatherless families the next step forward in raising children. So have we gone from denying that pornography would be other than an innocent diversion for sophisticated men, to seeing how it ruins marriages but denying that we could do anything about it, to celebrating it for “liberating” women and homosexuals.

When the monk retires to his cell at night, he examines his conscience. Was I too hasty to judge, when I saw that Brother Amedee had forgotten to bake the loaves again? Did I allow my mind to wander at prayer? When Brother Laurent tried to speak a kind word to me, why did I seem not to notice? Do I still harbor the old grudge? Do I think too well of myself?

When the ideologue retires to his bedroom, he does not examine his conscience. There’s nothing to examine, since ideology keeps its “sins” external. If you accept all that the ideology demands, you are justified, and you will do unto others only what they deserve, and if it is any less than what they deserve, you can mark that up to your clemency. The ideologue examines, or rather exercises surveillance over, other people’s smallest words and deeds. The monk feels compunction when he sees that, although his words to Brother Arnaut were kindly enough, he intended no kindness by them. The ideologue feels glad when he sees that, although his colleague’s words could be read most naturally as intending nothing vicious, they might be construed otherwise, regardless of intention. This he calls a “teachable moment,” and his fingers reach for the rod.

The monk goes out to the garden and tends the peas and beans. He likes them. He likes the frail tendrils he winds about the stake. He likes the good rich smell of the soil. He does not think about agricultural policies and global hunger. He thinks about bean soup.

The ideologue is strangely divorced from the correctives of things: of sawing wood, digging a well, changing a child’s diaper, picking apples from a ladder. He is like Marx in the British Library, grinding away in the relentless mill of his mind. He writes papers on the liberation of the working man, but he cannot stand that man’s sweat; he contrives programs for the edification of the poor, and may grace them with a visit once a year, but he does not actually like them, and manages to keep them comfortably distant.

It is wonderful to behold how many things of beauty those with the soul of the monk create. It is as if, from their deep wells of silence, they could draw upon the waters upon which the Spirit of God hovered in the beginning; and so we have Mont Saint-Michel, the Saint Matthew Passion, the Creation of Adam, and Paradise Lost. The ideologue does not create things of beauty. Rather he is suspicious of a love for beauty; he calls it a neurological tic, or reactionary sentiment. Leo the Isaurian was the essential ideologue in that respect. He wanted to smash the icons, but the monk John of Damascus prevailed against him. John Dewey, ideologue of democracy, smashed the classical education he had been given but no longer prized; but John Senior, Stratford Caldecott, and John Saward have striven to recover that classical education, and they are lovers of beauty all.

Beauty cannot be used, but must be received as a gift, in splendid excess, an aureole of being; so the ideologue is not interested in it. If the grotesque and the hideous can be employed to advance the ideologue’s project, then that is what we will have. Friendship, says Aristotle, is the highest end of human life, but the ideologue subordinates friendship to utility: he seeks not friends but allies, and when you cease to be an ally, you begin to be an enemy.

The secular ideologue is a religious fanatic without religion. The old monk has learned, through long years of patience and mortification, to subdue his unruly passions, so that a simple and childlike love may shine through, like a flame. The old ideologue—think of Marx, think of Madeleine Murry O’Hair—has learned, through long years of bustling activity and the denial of all merely human feelings before the necessities of political victory, to calcify and congeal his passions, so that a pure and fearful hate may glare through, like ice.

Let us be monks, my friends; and never underestimate the temptation to be the other.

Vote as a Catholic with a Catholic Moral Vision
Freemasons and Their Craft: What Catholics Should Know