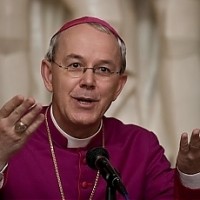 In an interview with the Polish magazine Polonia Christiana, Bishop Athanasius Schneider, Auxiliary of the Archdiocese of Saint Mary in Astana, Kazakhstan, offers strong criticism of the proceedings of the recent Extraordinary Synod on Marriage and Family, which he predicts “will remain for the future generations and for the historians a black mark which has stained the honour of the Apostolic See.” Earlier this year, Bishop Schneider conducted an interview with the Latin Mass Society of England and Wales which offered refreshing candor on the crisis in the Church — which he described as “the fourth great crisis” — and specifically touched on the trouble he saw brewing at the then-upcoming synod. He even predicted that a split in the Church was possible over the doctrinal issues surrounding divorce, remarriage, and communion. If the interview in May was bracing, today’s interview could be described as a “shot heard round the world.” Never in the modern Church has a Catholic Bishop so clearly stood against doctrinal errors coming from the highest echelons of the episcopacy. We have excerpted here some of the most significant sections. Hit the link at the bottom to see the full interview, which deserves to be read in its entirety. On the radical, heterodox nature of certain elements of the synod:

During the Synod there had been moments of obvious manipulation on the part of some clerics who held key positions in the editorial and governing structure of the Synod. The interim report (Relatio post disceptationem) was clearly a prefabricated text with no reference to the actual statements of the Synod fathers. In the sections on homosexuality, sexuality and “divorced and remarried” with their admittance to the sacraments the text represents a radical neo-pagan ideology. This is the first time in Church history that such a heterodox text was actually published as a document of an official meeting of Catholic bishops under the guidance of a pope, even though the text only had a preliminary character. Thanks be to God and to the prayers of the faithful all over the world that a consistent number of Synod fathers resolutely rejected such an agenda; this agenda reflects the corrupt and pagan main stream morality of our time, which is being imposed globally by means of political pressure and through the almost all-powerful official mass media, which are loyal to the principles of the world gender ideology party. Such a synod document, even if only preliminary, is a real shame and an indication to the extent the spirit of the anti-Christian world has already penetrated such important levels of the life of the Church. This document will remain for the future generations and for the historians a black mark which has stained the honour of the Apostolic See.

On the the Divine commandment pertaining to marriage, and the impropriety of acting as if this were subject to change:

In fact a Divine commandment, in our case the sixth commandment, the absolute indissolubility of the sacramental marriage, a Divinely established rule, means those in a state of grave sin cannot be admitted to Holy Communion. This is taught by Saint Paul in his letter inspired by the Holy Spirit in 1 Corinthians 11, 27-30, this cannot be put to the vote, just as the Divinity of Christ would never be put to a vote. A person who still has the indissoluble sacramental marriage bond and who in spite of this lives in a stable marital cohabitation with another person, by Divine law cannot be admitted to Holy Communion. To do so would be a public statement by the Church nefariously legitimizing a denial of the indissolubility of the Christian marriage and at the same time repealing the sixth commandment of God: “Thou shalt not commit adultery”. No human institution not even the Pope or an Ecumenical Council has the authority and the competency to invalidate even in the slightest or indirect manner one of the ten Divine commandments or the Divine words of Christ: “What therefore God has joined together, let man not separate (Math 19:6)”.

On the divisive language within the ranks of the bishops, and the parallels with the Arian crisis:

[W]hat is still aggravating, is the fact that such bishops try to legitimize their infidelity to Christ’s word by means of arguments such as “pastoral need”, “mercy”, “openness to the Holy Spirit”. Moreover they have no fear and no scruples to pervert in a Gnostic manner the real meaning of these words labeling at the same time those who oppose them and defend the immutable Divine commandment and the true non-human tradition as rigid, scrupulous or traditionalist. During the great Arian crisis in the IV century the defenders of the Divinity of the Son of God were labeled “intransigent” and “traditionalist” as well. Saint Athanasius was even excommunicated by Pope Liberius and the Pope justified this with the argument that Athanasius was not in communion with the Oriental bishops who were mostly heretics or semi-heretics. Saint Basil the Great stated in that situation the following: “Only one sin is nowadays severely punished: the attentive observance of the traditions of our Fathers. For that reason the good ones are thrown out of their places and brought to the desert” (Ep. 243).

On the subversive and confusing sections that remained in the final relatio:

The final Relatio of the Synod also unfortunately contains the paragraph with the vote on the issue of Holy Communion for “divorced remarried”. Even though it has not achieved the required two third of the votes, there remains nevertheless the worrying and astonishing fact that the absolute majority of the present bishops voted in favor of Holy Communion for the “divorced and remarried”,  a sad reflection on the spiritual quality of the catholic episcopacy in our days. It is moreover sad, that this paragraph which hasn’t got the required approval of the qualitative majority, remains nevertheless in the final text of the Relatio and will be sent to all dioceses for further discussion. It will surely only increase the doctrinal confusion among the priests and the faithful, being in the air, that Divine commandments and Divine words of Christ and those of the apostle Paul are put at the disposal of human decision making groups.

On the importance of faithful Catholic resistance to the distortion of Christ’s teachings:

That in the very bosom of the Church, there are people who undermine the teaching of Our Lord became an obvious fact and one for the whole world to see thanks to the internet and the work of some Catholic journalists who were not indifferent to what was happening to the Catholic faith which they consider to be the treasure of Christ. I was pleased to see that some Catholic journalists and internet bloggers behaved as good soldiers of Christ and drew attention to this clerical agenda of undermining the perennial teaching of Our Lord. Cardinals, bishops, priests, Catholic families, Catholic young people have to say to themselves: I refuse to conform to the neo-pagan spirit of this world, even when this spirit is spread by some bishops and cardinals; I will not accept their fallacious and perverse use of holy Divine mercy and of “new Pentecost”; I refuse to throw grains of incense before the statue of the idol of the gender ideology, before the idol of second marriages, of concubinage, even if my bishop would do so, I will not do so; with the grace of God I will choose to suffer rather than betray the whole truth of Christ on human sexuality and on marriage.

Bishop Schneider’s full interview goes into a great deal more depth and consideration on what went wrong in the synod, and also offers suggestions for what we should be doing to help families. For example:

We have to encourage ordinary Catholics to be faithful to the Catechism they have learned, to be faithful to the clear words of Christ in the Gospel, to be faithful to the faith their fathers and forefathers handed over to them. We have to organize circles of studies and conferences about the perennial teaching of the Church on the issue of marriage and chastity, inviting especially young people and married couples. We have to show the very beauty of a life in chastity, the very beauty of the Christian marriage and family, the great value of the Cross and of the sacrifice in our lives. We have to present ever more the examples of the Saints and of exemplary persons who demonstrated that in spite of the fact that they suffered the same temptations of the flesh, the same hostility and derision of the pagan world, they nevertheless with the grace of Christ led a happy life in chastity, in a Christian marriage and in family. The faith, the pure and integral Catholic and Apostolic faith will overcome the world (cf. 1 John 5: 4).  We have to found and promote youth groups of pure hearts, family groups, groups of Catholic spouses, who will be committed to the fidelity of their marriage vows. We have to organize groups which will help morally and materially broken families, single mothers, groups who will assist with prayer and with good counsel separated couples, groups and persons who will help “divorced and remarried” people to start a process of serious conversion, i.e. recognizing with humility their sinful situation and abandoning with the grace of God the sins which violate the commandment of God and the sanctity of the sacrament of marriage. We have to create groups who will carefully help persons with homosexual tendencies to enter the path of Christian conversion, the happy and beautiful path of a chaste life and to offer them eventually in a discrete manner a psychological cure. We have to show and preach to our contemporaries in the neo-pagan world the liberating Good News of the teaching of Christ: that the commandment of God, and even the sixth commandment is wise, is beauty: “The law of the Lord is perfect, converting the soul: the testimony of the Lord is sure, making wise the simple. The statutes of the Lord are right, rejoicing the heart: the commandment of the Lord is pure, enlightening the eyes” (Ps 19(18): 7-8).

Go here to read the full interview. It’s truly groundbreaking. And please pray for Bishop Schneider, that he may be granted widsom and courage to continue as one of the lone shepherds crying out for a return to obedience to Christ through the teachings of the Church. It appears that once again, we find ourselves in a situation of Athanasius contra mundum.

Cardinal Burke on the Catholic “Man-Crisis” And What To Do About It
Is There Hope Of Salvation Outside the Roman Catholic Church?