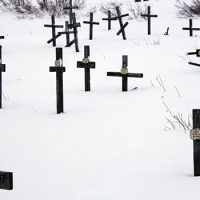 “It is not true, as is sometimes said, that man can organize the world without God. What is true is that, without God, he can ultimately only organize it against man. Exclusive humanism is inhuman humanism.”   ∼ Henri de Lubac, The Drama of Atheist Humanism

“If God does not exist … everything is permitted.”   ∼ Fyodor Dostoyevsky, Crime and Punishment

When a student of mine returned from a recent visit to Barcelona, where she’d spent a busy month babysitting small children, she reported that the host family she stayed with not only did not go to weekly Mass, or say Grace before meals, but positively refused to believe that these were practices other people might actually observe. When the student pointed out the oddity of their position—after all, Catholics the world over routinely do these things—they reminded her that while in Spain everyone is baptized, after a decent interval most people simply stay away, disdaining the Church whence their New Life in Christ began.

Utterly baffled by this anomaly, she went on to ask if the people of Spain ever return to church at all. Only three more times, they assured her. When making one’s First Holy Communion, they said—which is a big deal, indeed, a rite of passage—it is expected that people will attend since otherwise they can’t very well receive presents. And, then, when people decide to get married, there simply must be a Church wedding since there are so few backdrops as beguiling as the interior of an old church. Like La Sagrada Familia, for instance, a huge and stunningly beautiful basilica, looming in all its neo-gothic grandeur high above the Barcelona skyline. Who wouldn’t want to tie the knot in a place like that? And, finally, when people are about to be buried, it is the custom that the obsequies be performed, once again, in a church. After which, of course, oblivion awaits us all.

It had been, the student ruefully conceded, a real strain having to spend a month or more ensconced in the company of people who had pretty much emptied the cosmos of Christ, leaving the founder of their faith totally out of the picture. Had Jesus himself, one wonders, never left the tomb on Good Friday, would they have noticed anything missing from the Sunday that followed? Perhaps that’s what secularism does to people—it strips them of a hope they seem not even to miss. As if the very ladder we steadily climb into the heavens had all at once been dismantled, plunging us headlong into the abyss, and nobody notices. Or cares. As someone once said, there is nothing worse than the answer to a question nobody is asking. Could there be a sadder legacy to assign the inheritors of Spain’s future? Think of all those cherubic little children elatedly awaiting their first (and last) Eucharist, forced to live in a world shorn of any recognizable reminder that once upon a time their nation was the pride of Catholic Europe.

But it is not only Spain that has apparently decided belief in God and the Son he sent to save us, has become a fifth wheel. So much of a once thriving Christian West appears to have given up on God altogether, leaving only emptiness and ennui at the center of its godless soul. How did this all happen and might anything be done to make it ago away? To lift the veil of sadness, of an unending Holy Saturday, that seems to have enshrouded us for so long?

“We must begin in the situation in which we find ourselves,” advises Professor Peter Berger, “but we must not submit to it as an irresistible tyranny.” He wrote that line in a wonderful little book almost a half century ago, a book which—may it never go out of print!—bears a title so lapidary that on the strength of it alone any serious reader of theology should drop everything and go out and buy it. Called A Rumor of Angels: Modern Society and the Rediscovery of the Supernatural, it appeared at the very end of the 1960s, at a moment when the whole dreary Death of God thing was in full swing, and every month or so magazines the world over would commemorate God’s passing. And while the idea is pretty ludicrous on the face of it, as if mere creatures could somehow dagger God to death (Or is he expected to cool his heels out in the yard while the experts negotiate his existence inside?), the times were so out of joint back then that a great deal of silliness could be heard on the subject across the fruited plain. My all-time favorite was the late Tom Altizer, who grandly announced that the time had actually come for all good men to realize that “the death of God is an historical event, that God has died in our cosmos, in our history, in our existenz,” spelling the word in German to lend it a certain learned pomposity.

It is not enough, he went on to exhort, for believers “merely to accept the death of God.” Oh, no, that will never do. More than abject acquiescence will be required. Christians, he insisted, “must will the death of God.” Indeed, he added, “Christianity must will its own death.” In other words, we believers are obliged to slit our own throats, too. And to do so with resolute good cheer because (hear this) the only credible way to give a Christian witness to the world is by first disavowing the truth claims of Christianity. If that sounds preposterous then perhaps you haven’t really been listening to the new and improved version of the Good News. Imagine, then—if you dare—the martyred priest in that quiet little town in Normandy, whose throat is about to be slit while saying Mass, informing his killers that they needn’t bother inasmuch as he’ll happily slit his own throat for them.

An interesting postscript to Professor Altizer took place some years later when, his mother having suddenly taken ill, he rushes off to the nearest monastery, there to beseech the benighted monks to pray for her recovery. I believe that’s called hedging your bets.

So what happens when we dethrone God, as it were, and set about organizing a world without reference to him? Suppose we let Eric Voegelin tell us, who was one of the most profound and original thinkers of the last century. “The deicide of the gnostic theoretician will,” he predicted in a telling sentence, “inevitably be followed by the homicide of the revolutionary practitioner.” Bingo. In short, if you can kill God, which evidently the march of progress has been urging us to do for sometime now, then it’s hardly a stretch to apply with equal rigor the principle that it is now permissible to kill those made in his image and likeness. Only the willfully blind will refuse to see the connection, the link between a world without God and lethal acts of violence inflicted upon men. If we are no longer to be seen as a little less than the angels (“What is man that Thou art so mindful of him?”—to sound the trumpet of Psalm 8), it is because we no longer acknowledge God as guarantor of those tablets of truth and value transcendent to ourselves.

And so—to return to Berger and his little book—if all the evidence of God left in a world determined on his extinction has been reduced to the status of rumor—about which we have all been carefully coached to whisper furtively among ourselves—then we have simply got to get over our damned reticence and start shouting all the more. About what? About a God having once come among us, and the startling fact of his continuing saving presence in our midst. What else is faith for if it will not begin with the acknowledgment that God, far from being dead, continues in fact to pitch his tent square in our midst. And God will not go away however thick the sheet rock of secularism we hang in order not to see him. We cannot kill God, for without recourse to him—whether in the soul or in that larger and more public life we call culture—we shall most certainly continue to kill one another.

If You Don’t Do These Things, You Aren’t a “Practicing Catholic”
Is Islam a Religion of Peace or Violence?